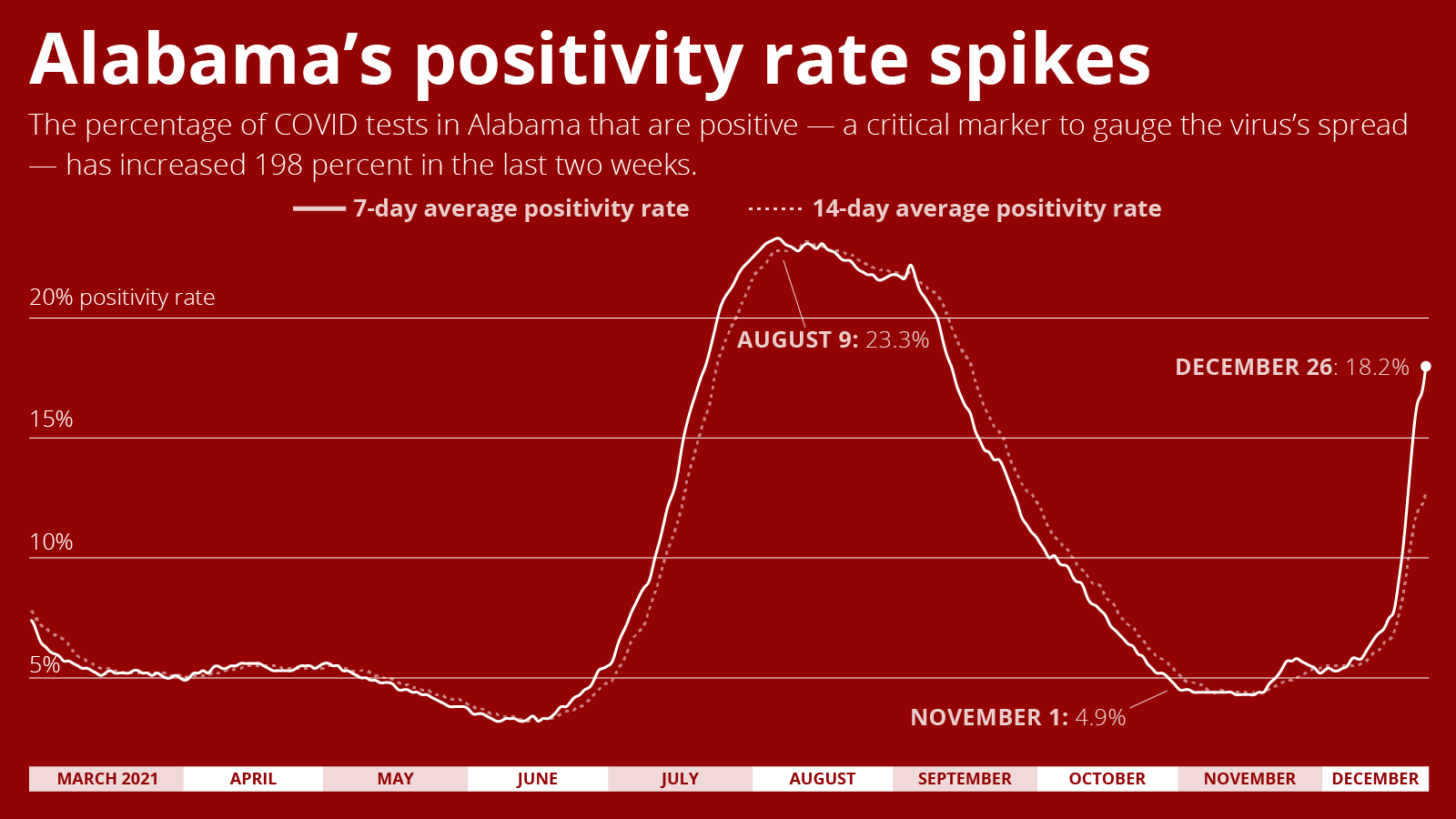 The average daily percent positivity over the week ending Sunday was 18.2 percent, more than three times what public health experts say it should be.

COVID-19 is beginning to surge in Alabama once again as the more contagious omicron variant is spreading fast across the U.S. and health experts voice concern about holiday gatherings.

The percentage of COVID tests in Alabama that are positive — a critical marker to gauge the virus’s spread — increased by 198 percent in the last two weeks. The average daily positivity rate over the week ending Sunday was 18.2 percent, more than three times what public health experts say it should be or cases are going undetected and community spread is prevalent.

The number of new daily cases reported to the Alabama Department of Public Health is surging as well, reaching an average of 1,771 new daily reported cases over the week ending Sunday, a 142 percent increase from two weeks before.

The seven-day average number of new daily cases by date of infectiousness grew by 171 percent from Dec. 10 to Friday, reaching 1,515 new cases.

All but 12 of Alabama’s 67 counties on Monday were categorized as having high levels of community transmission of COVID, while six of those 12 had substantial levels of transmission, according to the Alabama Department of Public Health.

While health experts say early signs may indicate the omicron variant could result in less severe illness and a decreased need to hospitalize, Alabama’s COVID hospitalizations are rising as well.

COVID hospitalizations statewide broke over 500 on Monday for the first time since Oct. 25, reaching 528 on Monday, a 59 percent increase over two weeks, according to the Alabama Department of Public Health.

Alabama leads the nation in COVID deaths per capita, with 334 deaths per 100,000 residents, according to the CDC.

“When you are talking about a New Year’s Eve party where you have 30, 40, 50 people celebrating, you do not know the status of the vaccination, I would recommend strongly: Stay away from that this year,” Dr. Anthony Fauci, director of the National Institute of Allergy and Infectious Diseases, told CNN on Monday. “There will be other years to do that. But not this year.”