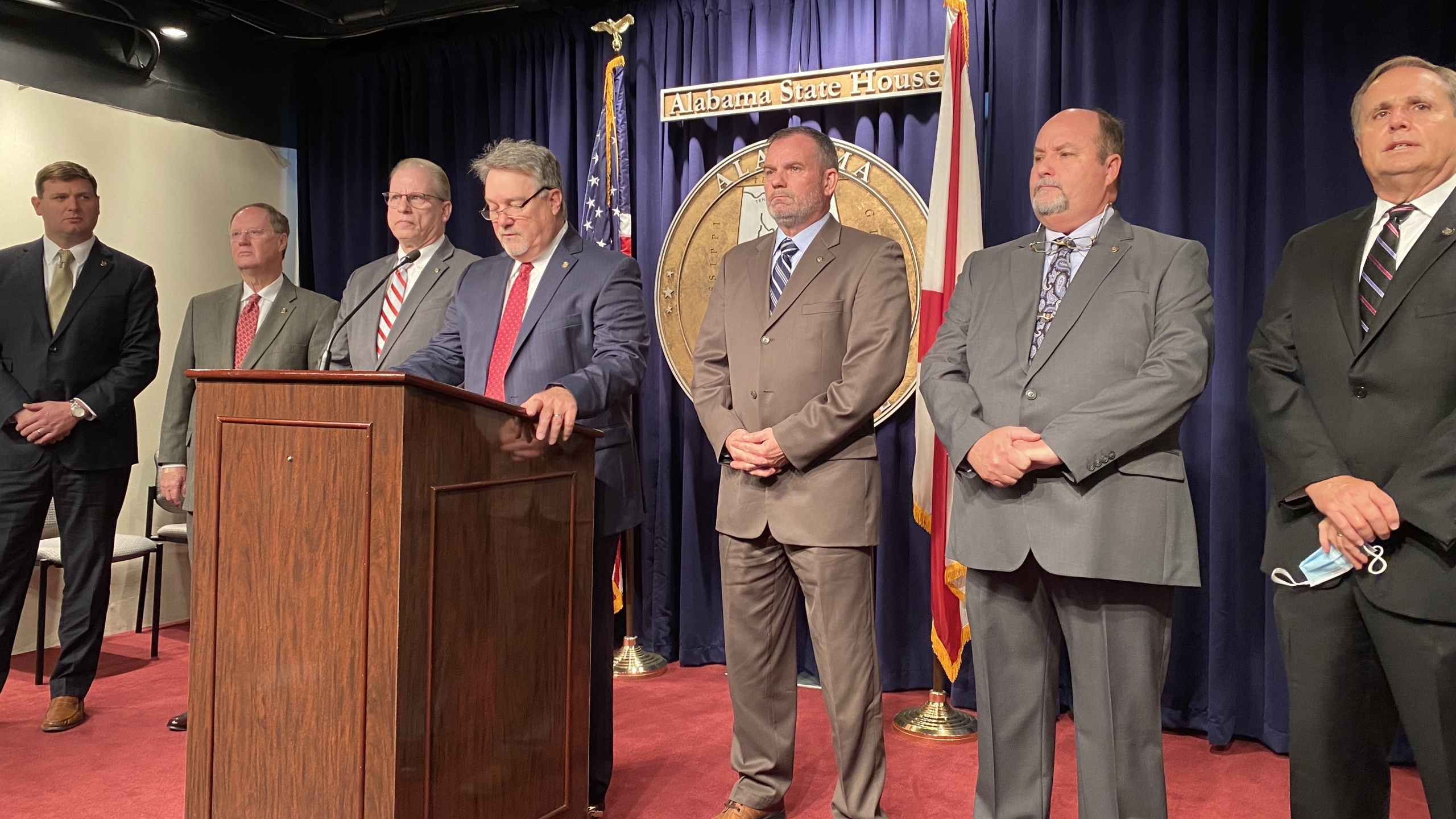 Members of the Alabama House Republican Caucus stand together at the announcement of the 2022 agenda. (JACOB HOLMES/APR)

Many of the issues on the agenda are not a surprise: banning Critical Race Theory from classrooms, allowing permitless concealed carry, expanding rural broadband and more.

One item that did not appear on the agenda is the creation of a state lottery.

“Members of the caucus have various opinions about the gaming and lottery bills,” said House Majority Leader Nathaniel Ledbetter, R-Rainsville. “I’m not sure that’s going to be a part of the caucus agenda. There are too many unanswered questions.”

No healthcare measures were listed on the agenda either. Ledbetter said Gov. Kay Ivey will lead the distribution of American Rescue Plan funds. “We don’t want to step on that,” he said.

Banning Critical Race Theory has been a major talking point for Republicans over the past few months although the college-level theory has not been taught previously in Alabama schools and the State Board of Education has already passed a resolution banning the theory.

State Rep. Randall Shedd, R – Fairview, who chaired the Caucus platform committee, said it is important to codify the banning of Critical Race Theory despite the school board’s action.

“They could meet and reverse that at any time,” Shedd said. He also said lawmakers would be “very careful” with the legislation so that it does not cause confusion about what teachers can educate students on when it comes to historical events such as the Civil Rights Movement.

The agenda also calls for banning “other extremist social doctrines” but does not identify what those would be.

Permitless carry, dubbed “constitutional carry” by proponents, has advanced out of the Senate multiple times over recent years, only to die in the House.

However, this year the caucus has made it a priority.

Rep. Shane Stringer, R-Citronelle, said the difference this year is the creation of a database of people prohibited to possess a firearm.

The agenda says the bill will allow Alabamians to carry firearms “without first having to pay a gun tax in the form of permit fees.”

Under the category entitled “standing tall for the unborn,” the recent “heartbeat bill” mirroring the controversial Texas law was notably absent.

Ledbetter said that bill was filed after the caucus met to set the agenda and that the committee had discussed looking to the Supreme Court’s ruling on the Texas law before following suit.

Instead, the caucus is pledging to “begin the process to streamline, clarify and improve the adoption process so foster care and adoption agencies may more easily move children into permanent families and forever homes.”

The agenda also calls for the passage of a resolution to urge the Supreme Court to rule in favor of the Mississippi law banning abortions after 15 weeks.

Alabama already has a law on the books banning almost all abortions, but the law has been blocked as it works its way through the courts.

Republicans will continue to focus on expanding broadband in rural Alabama, with the caucus pledging “historic funding.”

Broadband expansion has been a focus in the State House for several years.

House Republicans will once again bring forward an anti-riot act in response to the 2020 riots following the killing of George Floyd by a police officer. Legislators brought the bill in the last session but the bill was not passed by the Senate before the session concluded. The bill would bring new and strengthened penalties for involvement in riots.

One item on the agenda states the caucus will “will protect state law enforcement officers from enforcing unconstitutional, anti-Second Amendment, federal executive orders that are signed and issued by the Biden administration.”

One item on the agenda vaguely states the caucus “will oppose any efforts by Alabama Democrats to erode the state’s election integrity, voter identification, absentee ballot security laws.”

When asked if there were any specific efforts by Democrats to “erode election integrity,” Shedd said the caucus had simply “heard some things” and wanted to be prepared to oppose those efforts.

The agenda includes legislation to provide pay raises for teachers and public education staff as well as a bill to provide a longevity bonus for education retirees.

The caucus agenda says the members “will pass a historic tax cut that exempts the first $40,000 of business personal property from taxation in order to recognize the important role that small businesses and farms play in our state’s economy.”

The caucus plans to approve a package of bills recommended by the Military Stability Commission and “designed to make Alabama the nation’s friendliest state for service members, dependents, and veterans.” The package will also help Alabama preserve and expand the military bases and infrastructure located throughout the state, according to the caucus agenda.

“I believe the platform committee crafted a document that truly reflects the needs, issues, and concerns that matter most to our fellow Alabamians,” Shedd said.  “It is an ambitious but achievable agenda that is firmly rooted in constitutional principles, conservative policies, and commonsense philosophy.”