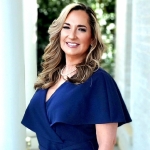 McClure is a small businesswoman with years of experience in sales and management. Before working for President Donald Trump, Angela was sales director for a large medical supply company and is presently the director of the Alabama First Responders Association.

Previously, Angela owned a pet services company in the Madison County area before stepping away to attend Birmingham School of Law.

She graduated from BSL with a juris doctorate. Angela’s grandmother was the first female lawyer to graduate from Jones School of Law in Montgomery and she is proud to follow in her footsteps.

“I am honored for the opportunity to serve the people of District 20. I’ve been a longtime resident of the Huntsville area and I’ve reared two children here. We have a beautiful, thriving community that deserves common sense leadership.

We must focus on better education for our kids by protecting them from outside liberal interests. My 11 year old daughter comes home from public school with liberal ideas. Regardless of what educators tell us, socialism is infiltrating our schools and we must put an end to it. We must protect our children.

Huntsville is now the largest city in Alabama. We are home to great small businesses, corporations, military, NASA, and now Space Command. It’s important that we continue providing incentives in order to keep these organizations.

Space Command and the new FBI center are bringing in thousands of good paying jobs. I will work with state and local governments in providing resources to keep those jobs here and create new ones.

I look forward to meeting friends and neighbors on the campaign trail. Please feel free to reach out anytime.”

Last year, Angela volunteered for the Clarion project by helping to process some of the 4,500 American passports for the State Department during the Afghan exit crisis. Countless lives were saved.  The Republican primary election will be held on May 24, 2022.