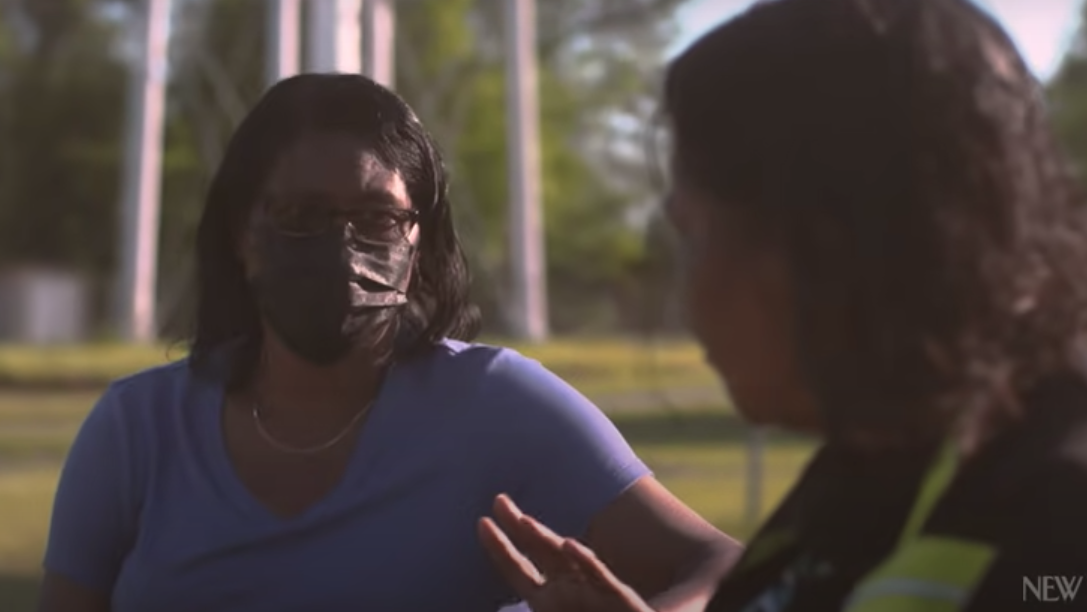 Dorothy Oliver knew from the start that the COVID-19 pandemic was serious, so she set out to make sure her small Alabama community of Panola knew that too.

The result? All but a handful in her majority Black community of approximately 350 are vaccinated against COVID, and Panola has had a single COVID death, Oliver told APR recently.

The 16-minute documentary “The Panola Project” released by The New Yorker last summer follows Oliver and Sumter County Commissioner Drucilla Russ-Jackson as the two spread the vaccine message in their community from person to person, answering questions about the vaccine with kindness and conviction and working to make sure enough signed up for vaccinations to get a local hospital to set up a clinic there. The film is being screened at the Sundance Film Festival.

“I started early,” Oliver told APR recently. “I didn’t wait until the shots got going. I started educating people.”

The filmmakers, Jeremy Levine and Racheal DeCruz, in a message to APR discussed the film and Dorothy’s work.

For DeCruz, associate director of advocacy at the Boston University Center for Antiracist Research, what’s at the heart of the film is the importance of trust and relationships in moving people to action. Oliver was successful because she knows her neighbors and people knew she has their best interests at heart, DeCruz said.

“She jokes, cajoles, and pushes. But she never talks down to anyone—and neither does our film,” DeCruz said. “Dorothy kept at it until she got people to commit to take the shot. And then she held them accountable by calling to check-in to make sure they actually showed up.”

Levine, an assistant professor in the communication, journalism, and media department at Suffolk University, told APR that Oliver was never judgmental, and took people’s questions seriously.

“If she didn’t know the answers, she promised to find someone who did. She also brought  lightness and joy into these conversations. She was relentlessly persistent, but in an almost playful way,” Levine said.

Oliver also shared how the pandemic had so profoundly impacted her family, which brought what’s at stake into stark relief, Levine said.

“You could feel it on an emotional level,” Levine said. “And the folks who she was talking to would feel her grief and anguish and the weight of this disease. All of this together really moved people to action in an incredible way.”

Panola’s vaccination rate stands in stark contrast to the state’s, which has the sixth lowest percentage of fully vaccinated residents in the nation, according to the Centers for Disease Control and Prevention. Alabama also has the fourth highest number of COVID deaths per capita in the U.S.

The difficulty of getting all those Panola residents vaccinated wasn’t as much about vaccine hesitancy as it was about access to care, Oliver explained. Many people don’t have transportation, and the nearest hospital is many miles away, she said.

Levine said both filmmakers knew going in that structural issues were at least as important as the issue of vaccine hesitancy and resistance.

“But going around town with Dorothy, it became abundantly clear how much of the problem was structural. Most people in Panola wanted the shot—but they couldn’t get one,” Levine said.

“There are so many systemic barriers facing Panola residents, including a lack of access to health care—the nearest hospital being almost 40 miles away—challenges with access to internet and transportation, and a lack of access to information from the government,” DeCruz said. “Decades of disinvestment by the government created the outcomes that we see in Panola today. Racist policies that disproportionately impact people of color are not just a thing of the past. Every year, decisions are being made at the local, state, and federal level that reinforce the racial disparities we see across the country.”

Oliver received the Best of Womankind award from USA Today, and Dr. Anthony Fauci thanked her personally in a recorded video.

“I said ‘Oh my God.’ My daughter said ‘You okay over there?  I was just over there sitting still,” Oliver said of the shock of seeing Dr. Fauci thank her personally.

Oliver said only one man got cross with her over her insistence he get vaccinated, telling her “it’s all politics.”

“I didn’t get ugly with him. I just told him to look at the news. Is politics killing all those folks?,” Oliver said.

Eventually that man called her and thanked her for staying on him. He got vaccinated too, she said.

Asked how other communities could emulate what she did, Oliver explained there needs to be those trusted persons in those communities working tirelessly to get shots in arms.

“It was a job,” Oliver said of the hard work it took to get so many people vaccinated. “If I hadn’t put 100 percent in it, it wouldn’t have happened…I don’t meet any strangers either. That helps. I’ll talk to anybody.”

That resound to protect her community kept her going even when some resisted the idea of vaccination.

“I would tell them, if you don’t want to do it for yourself, do it for your family members,” Oliver said. “For your church members. For the people surrounding you.”

“I still have my four or five who just refuse to get it,” Oliver said. “But don’t think I’m going to give up on them.”