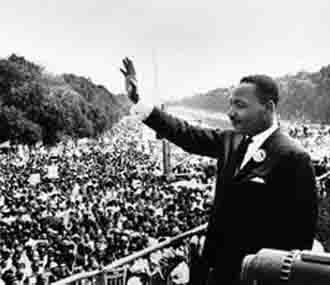 “I can only tell you what Jesus told me. I can only say to you what I think God wants us to do. I can still here those words thrown across the centuries: Love your enemies…”

In retrospect we can only imagine how hard it must have been for Black Americans to have listen to Dr. King’s advice that day in Gadsden.

Words, ancient and true, heard by children of all colors in Christian worship for millennia, words so familiar in our churches yet so difficult in our everyday lives.

As we remember the life of Dr.Martin Luther King, Jr., there are many things to admire, many facets to a life so brightly lived ,and so quickly extinguished. But it was King’s message of love, of winning through non-violence that gave his message its eternal strength.

“Now let me hasten to say that Jesus was very serious when he gave this command; he wasn’t playing. He realized that it’s hard to love your enemies. He realized that it’s difficult to love those persons who seek to defeat you, those persons who say evil things about you. He realized that it was painfully hard, pressingly hard. But he wasn’t playing. And we cannot dismiss this passage as just another example of Oriental hyperbole, just a sort of exaggeration to get over the point. This is a basic philosophy of all that we hear coming from the lips of our Master. Because Jesus wasn’t playing; because he was serious. We have the Christian and moral responsibility to seek to discover the meaning of these words, and to discover how we can live out this command, and why we should live by this command.”

King spoke of, “the Christian and moral responsibility,” of loving our enemies.

To often, today as then we hear the words “Christian and moral responsibility” used not in the context of love but in the dogma of hate.

On the day of the inauguration of the second term of President Barack Hussein Obama, the country is divided, more filled with surreptitious racism than anytime in our history. In the past, racism was not covert, it was front and center in thought and action in our nation. Today, the President is seen by many as transformative and by others as just short of tyrannical. Once again our leaders, especially in the South—the home of my birth and where my roots run deep—use every occasion to vilify, the current president. They use his words and action for their personal political benefit. Even the top priorities of the Republican House caucus are laws that are against Obama.

Once again, this is political pandering not a plan of governing.

Personally I am not in favor of most of the presidents policies, but I was not that fond of George W.Bush, either. However, in life as in politics I find it better to be for something than against everything.

King’s legacy speaks to being for justice, for equality, and for liberty but never against people.

King never asked for more than what the Founding Fathers promised, he did not run against Washington, Jefferson or Madison, he marched for the ideas, the same principles that made this country great.

Small people spend their lives being against things, great women and men live their lives for something.

There was among many whites an seething hatred of Dr. King, today, we see an irrational hatred of the current President. We also see the President use this hatred to his political advantage.

I have a friend who has alway encouraged me to accept the will of the voters. I do not trust voters, because too many are uninformed and willfully ignorant of the facts. Too many voters are more swayed by sound bites and campaign jargon than reality.

However, when the President won reelection, it turns out my friend is not all that trusting of the voters anymore.

Sadly, I fear that we have once again fallen prey to the unrelenting punishment of time, that being the propensity to forget, we have forgotten that the way to a better tomorrow is built by doing good today, by working for a better future and not just railing against a harsh realities of today.

In King’s speech in Gadsden there was an exchange with the audience:

King: I hear they are beating you.

King: I hear they are cursing you.

King: I hear they are going into your homes and doing nasty thing and beating you.

King is speaking about a spirit that is driven by love. It is love not fear that gives the soul courage. Is it not true that it is better to light a candle than to sit and curse the darkness? Is it not better to love than to hate? If we know these things why then do we continue to curse the darkness to hate our brothers? Because it is easy to be against something, it takes little effort, but to bring about freedom, justice and equality for all that takes hard work, dedication and giving.

I have found that love is the most powerful verb in the universe. All real love requires that we give something of ourselves. In the struggle which King so bravely toiled he said that the best way was “non-violent resistance based on the principle of love.” It seems to me that this is the only way as our eyes look to the future. As we look out across the years and across the generations, let us develop and move right here. We must discover the power of love, the power, the redemptive power of love. And when we discover that we will be able to make of this old world a new world. We will be able to make men better. Love is the only way. Jesus discovered that.”

To this I say, Amen!