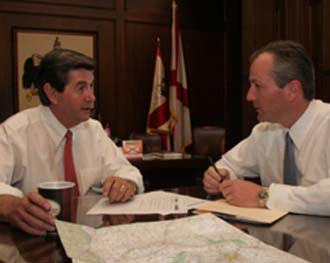 MONTGOMERY—How did then-Governor Bob Riley and Chairman of the ALGOP Mike Hubbard route almost a million dollars in republican campaigns contribution through a nonprofit and back to a Hubbard owned company?

“Someone from the governor’s [Bob Riley’s] office would call and say you’re getting a check for $200,000 and you’re going to get a bill at the same time from [Mike] Hubbard’s deal and you need to pay that, that is what that money is for.”

Those are the words of A. Eric Johnston a Birmingham-based attorney and anti-gambling advocate who explains the operational relationship between Bob Riley, Mike Hubbard and his 501c(4), Citizens for a better Alabama.

According to Johnston, efforts by then-Governor Bob Riley allowed over a million dollars to flow through his nonprofit, Citizens for Better Alabama, into to the hands of Mike Hubbard.

The picture Johnston paints appears to be a brazen orchestration of campaign funds by a sitting governor to benefit his most faithful ally, Mike Hubbard.

Citizens for Better Alabama (CBA) was a Birmingham-based, tax-exempt group that was the public face of opposition to Sweet Home Alabama, and to shut down legal casinos operated at VictoryLand and Country Crossings. According to archived versions of its website, the CBA – run by A. Eric Johnston – has “been an advocate for the family since 1991.”

In the beginning according to Johnston CBA did not have a lot of money to fight gambling in Alabama. In a 2009, Johnston wrote a letter, denouncing the deceptive ads being run for the Sweet Home Alabama plan. In the letter he wrote, “The Citizens for a Better Alabama may not have the millions of dollars it would take to combat these deceptive ads on the airwaves, but we do have the truth on our side.”

Johnston is a well-known figure around the halls of power in Montgomery. He has worked for years on social issue such as pro-life and gambling. He is respected as a man of honesty and integrity.

Johnston said he had been fighting gambling for years without much help. “We really never had a knight on a white horse… We just had to fight it in legislature and kill the bills.”

But according to Johnston in the last year of Bob Riley’s last term as governor that all change when the governor decided to fight gambling in the state.
According to Johnston, when Riley became interested in ridding the state of bingo gambling he was contacted by the Governor who said he wanted to help Johnston raise money.

“I don’t know why he [Riley] decided to do it [fight gambling] other than it was a propitious time to do it,” said Johnston. “Whatever he was doing was good. He was stopping illegal gambling.”

At the time it seemed that Johnston had found his white knight. But there was a problem, rather than making a partnership with a crusading knight, it seems Johnston had unknowingly entered into a potential devil’s bargain.

After aligning with Riley and Hubbard in 2010, CBA raised and spent over $1 million after never taking in over $50,000 in a year ever before.

Based on 2010 campaign finance and other records, the CBA was a crucial conduit for passing campaign cash through the 501c(4) into a potentially lucrative aspect of Mike Hubbard’s financial bottom-line.

According to the IRS Form 990 tax return filed by CBA for 2010, the tax-exempt 501c(4) group took in a little over $1 million in donations. Of that amount, $413,750 came from Hubbard’s personal leadership PAC – the Auburn-based Network PAC – between February and October 2010.

Johnston said that the money that his organization received was almost entirely for advertising, he said, “Mike was in that business and I thought it appropriate for him to handle it.”

Again a pattern occurs where Hubbard directs money to an entity and then that money is given back to a Hubbard-owned business. However, in this case, money was being directed by Bob Riley told the head of the 501c(4) how the money was to be spent. Not just the large amounts but even the so-called small donation. “I would be informed by the governor’s office that I would be getting a check for 2 or 3 thousand dollars and we would have ad bills that cost that much,” said Johnston,  “and that money would be for those bills.”

According to Johnson, “We ran a zero balance campaign. Whatever money came in was spent, a lot of it was coordinated through Mike Hubbard’s company.”
In an April 2010 story in the “Huntsville Times,” Hubbard said that his media companies were placing anti-bingo advertising for the CBA. “The Times” reported that “even though his company is benefiting financially from placing the anti-gambling ads Hubbard said ‘that would not stop him from voting’ on the bill to allow voter referendum on legalized gambling.

The usual fee for placing ads is 15 to 20 percent. With the new revelations from Johnston, it appears that a lot more was going on than profiting from ad placement.

The question must be asked, “Why was the Chairman of the ALGOP coordinating money and advertising for a nonprofit that is suppose to be non-partisan and then funneling the money to his own companies? What business did a sitting governor and his staff have direct campaign donations to a nonprofit that was suppose to be non-partisan and then actually telling then how to spend the money?’

Johnston said that Mike Hubbard, directed the Media, “I would just get the bills.”
But Johnston admits that he would be told BEFORE he received the cash where and to whom it must go too.

Johnston said, he, Riley and Hubbard, while not close, “worked together as a team.” This type of coordination would seem to violate Citizens for Better Alabama tax-exempt status.

Johnston supplied “Alabama Political Reporter” with a copy of CBA’s 990 IRS fillings. However, the document we received is different than the one that Johnston filed with the IRS, according to a comparison on Guide Star.

On the 990 fillings, Johnston does not itemize the over $700,000 he received from Hubbard’s Network PAC and Bob Riley’s Gov PAC. The rest of the money primarily originated with longtime big-money Bob Riley donors.

Johnston as the sole member of CBA said, “I didn’t raise any money.”
He says that Riley would call high-networth individuals around the state to ask for contributions, “I recognized many of the people that sent money. It was the businessmen from around the state.”

Johnston said a few called him to talk about CBA and after his conversation with them they would send in a check. However, the bulk of the money came from two PACs where the donors presumably thought that their money was going to finance campaigns not anti-gambling ads.

In a report by the “Mobile Bay Times” they wrote, “recent public files show that the organization [CBA] has placed over a quarter of a million dollars in broadcast media ads going back to January 27, 2010 and continuing through February 18, 2010.” The report also says that the, “…sum does not include the costs associated with advertising production or the printing, distribution, and insertion of phony ‘Special Report’ news-style bulletins in nearly 40 papers across Alabama in recent weeks.”

When asked for CBA’s expenses for 2010, Eric Johnston only supplied the groups 990 IRS filing. If only approximately $250,000 was placed in media buys then where did the remaining $700,000 plus go? Did Mike Hubbard’s Network Creative Media supply CBA with a large sum of advertising products?

Another anomaly during the affair is why was  $101,750 sent from Hubbard’s Network PAC to CBA after the announcement of the federal bingo investigation and the end of efforts to pass bingo legislation?

It would take a clear examination of CBA, Bob Riley’s and Mike Hubbard’s banking records to know for sure what happened to all the money. What Eric Johnston has made clear, is that Riley raised the money, along with two PACs.

His statements to the Alabama Political Reporter also made it clear that Riley directed payments to Mike Hubbard and Hubbard handled whatever media was developed or purchased.

The following is a breakdown of CBA contributions:

Bob Riley’s GOV PAC is formed in late 2009 specifically for the anti-bingo effort.  Below is the  first list of contributions starting in December 2009:

The  next group of contributions in early 2010:

GOV PAC’s last big contribution report in 2010 including the $93,000 from the Alabama GOP that originated with Poarch Creek money conduit RSLC:

GOV PAC’s last list of alleged donations to CBA (none of these are listed on CBA’s form 990):

Alabama GOP’s (PAC controlled by Mike Hubbard) first report of a diversion of money showing money diverted to other PACS allegedly to go to CBA (note $50,000 to NETPAC in early February 2010):

The expenditures report for the 45-day pre-primary report for the Alabama GOP  shows the $150,000 from Poarch conduit RSLC broken into a $93,000 contribution to GOV PAC (on page 3 of this report–shown above to have been allegedly sent on to CBA) and a $57,000 contribution to NETWORK PAC (controlled by Mike Hubbard – page 5); additionally, there is a diversion of $35,000 of party money to AG PAC headed by Bob Riley’s niece and nephew (Johnny and Kim Adams – page 1) and a diversion of $45,000 to another PAC headed by Riley’s niece and nephew – Victory PAC (page 7) along with an additional $35,000 diverted to NETWORK PAC (page 5).  All of this money eventually ended up in NETWORK PAC.

On the expenditure side of the 45-day pre-primary report of Mike Hubbard’s NETWORK PAC we see $312,000 allegedly sent to CBA with the bulk of this money diverted from the Alabama Republican Party (NONE of this is shown on CBA’s 990):

In the middle of a runoff campaign (July 2010) – and weeks after the bingo effort died – NETWORK PAC is still showing an alleged $10,000 contribution to CBA (this is NOT shown on CBA’s 990):

In the 45-day pre-fall election report NETWORK PAC again shows a contribution to CBA that is not on CBA’s 990:

The 10-day pre-election report for NETWORK PAC shows yet another alleged contribution to CBA that is not shown on CBA’s 990 form:

In all, over $700,000 is shown contributed to GOV PAC and NETWORK PAC that is allegedly sent on to CBA – but none of that money is reported as received by CBA in its IRS form 990.

In this article:Bob Riley, Mike Hubbard