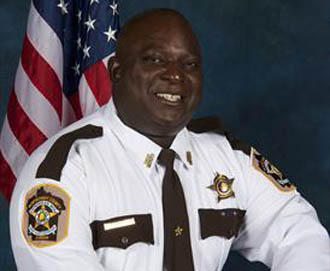 MONTGOMERY—Derrick Cunningham, Chief Deputy of the Montgomery County Sheriff’s Office is hosting an event today from 5:00 p.m. until 6:00 p.m. under a big tent at Tallapoosa Street (directly across from the Renaissance Hotel).

According to sources close to the sheriff, at the event Sheriff D.T. Marshall is going to announce that he is not going to seek re-election for office. Instead, he is going to endorse his chief deputy, Derrick Cunningham, for sheriff. Cunningham is expected to immediately announce his candidacy for the top post.

The primary will be held in June 2014 with the final election in November.

Chief Cunningham is in charge of the budget for the Sheriff’s Office which operates on an annual income of $27 million. Before his appointment, Cunningham was employed by the Montgomery Police Department. He started his law enforcement career in 1989 as a patrol officer. He finished his tenure with the Montgomery Police Department in the Detective Division where he was assigned to the homicide unit. He is a member of the International Homicide Investigators Association.

Cunningham has a Bachelor of Science Degree from Troy University. He has attended numerous schools and seminars throughout the United States since the start of his law enforcement career. He is retired from the Alabama National Guard with over twenty four years of service. Chief Cunningham is the point of contact for Homeland Security for Montgomery County, overseeing funding for the county. He attended the F.B.I. National Academy and is a graduate of Class 231, December 2007.