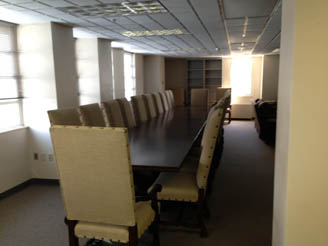 MONTGOMERY–Speaker of the House Mike Hubbard, (R-Auburn), championed the republican virtues of fiscal responsibility and limited government in his rise to power in 2010.

However, under Hubbard’s leadership, lavish spending on offices, furnishing and salaries has increased dramatically.

During the 2013 legislative session, Hubbard authorized tens of thousands of taxpayer dollars to paint and furnish a “cloakroom” for legislators to “relax in” on the fourth floor of the State House.

Information gathered by the Legislative Building Authority shows that Hubbard spent over $30,000.00 on furniture, paint and carpeting for room 402. This does not include built-in-bookshelves, a full kitchen or other amenities and construction costs.

This room, which was never utilized during the 2013 session, is adorned with expensive furnishings, all with an air of absolute refinement; the likes of which was never seen under the GOP’s democratic predecessors.

There is even a grand, eleven-foot conference table that cost the taxpayers $4,464.00. The hardwood table is surrounded by 20 San Simeon Fabric high-back chair with a price tag of $6,380.00.

The conference table and chairs around which so-called fiscally conservative legislators are to have relaxing conversations cost the hardworking people of Alabama, $10,844.00. This is more than a third of the average yearly income for an individual in the state.

For the cost of the conference table and chairs alone, a person could purchase a livable mobile home in Hubbard’s district.

Yet, no one lives there and no one works there. It is meant to be a place for legislators to fellowship, rest or have a chat.

The Congress in Washington, DC, has its cloakrooms. According to The Oxford Guide to the United States Government, the cloakrooms have become a place where “Members meet…to work out legislative compromises, use the phones or simply rest.”

Lyndon B. Johnson once said of the cloakroom,

“Now, you don’t just come right out on the floor and lay important bills right out in front of God and all those voters. That’s not the way it’s done and you could lose before you get started; which doesn’t look good to the folks back home. You have to take it slow and easy, working your colleagues over like gentlemen–not on the floor but in the cloakrooms–explaining and trading, but always letting them see what’s in it for them. Then when you’re sure–Ivory soap sure, and you know you have the votes buttoned up in your back pocket–you come out statesmanlike on the Senate floor and, in the spirit of democracy, have a little debate for the people.”

One republican legislator who spoke off the record for fear of retribution said,

“When Mike showed me that room, I thought, ‘I am not going near that place. If people find out I’m hanging out in a room like this I’d never get re-elected.”

This was all approved by the Speaker of the House, who in 2010 ran against, tax-and-spend liberals.

Hubbard is known to love the trappings of power, traveling in his state-provided black SUV with his body guard and entourage.

Hubbard, a man who has claimed that he is a real republican, increased spending in the Speaker’s office over his democratic predecessor by 82.6 percent–not including what he has spent on lavish appointments throughout the statehouse.

Under Hubbard’s leadership, the republican supermajority has cut state-workers, denied pay-increases and downsized government for everyone else, yet the state has one growth industry of government–perks of office for the GOP…especially, Mike Hubbard.