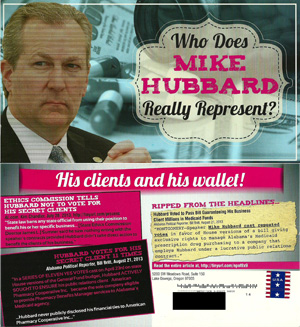 MONTGOMERY—A new campaign mailer was distributed to voters in District 79 last week. It asks one question, “Who does Mike Hubbard really represent?”

A picture of the beleaguered Speaker of the House is overlaid on top of images of $100 dollar bills and pharmaceutical capsules. The back of the mailer purports to answer the question by stating, “His clients and his wallet.”

Noted as proof are stories by AL.COM and the Alabama Political Reporter. Each story deal with the fact that during the 2013 legislative season Hubbard, voted yes 11 times to insert language into the State’s General Fund budget that would have benefited one of Hubbard’s lobbying clients American Pharmacy Cooperative Inc. (APCI). See story.

Through a scheme unknown to most members of the Alabama House of Representatives Hubbard is believed to have arranged for 23 words to be placed into the budget which would have given APCI sole rights to administer the State’s multimillion dollar pharmaceutical benefit management plan.

Only a last minute pushback from the governor’s administration kept the scheme from becoming law.

Hubbard, had kept his lobbying contract a secret from his colleagues and even the state ethics commission until question began to surface during the debate over the passage of the bill favoring his client APCI.

As the news reports mentioned in the mailer point out Hubbard sought the advice of the ethic commission after he had already signed the contract with APCI.

James L. Sumner, the Director of the Alabama Ethics Commission, told Hubbard he saw nothing wrong with the contract as long as Hubbard did nothing to “directly benefit his client.” See story.

Sumner said he gave Hubbard approval even though he never saw the contract and relied entirely on Hubbard’s verbal characterization of the business arrangement.

However, Hubbard actions would have greatly added to his clients bottom-line had the 23 words not been discovered.

Currently, the state is looking at how it might implement a pharmaceutical benefit management plan. Meanwhile, APCI is giving tens of thousands of dollars to republican candidates in the House and Senate.

All of the actions taken by Hubbard and others on behalf of APCI is believed to be a part of the Grand Jury investigations.

The mailer list as it address of origin as 5200 SW Meadows Road, Suite 150, Lake Oswego, Oregon. This address is a virtual office solution according to the website.