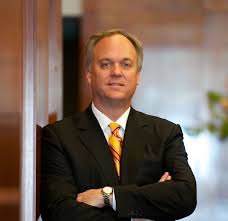 Former Senator French is seeking is the seat that Paul DeMarco is vacating (Alabama House District 46).  It includes parts of Hoover, Homewood, and Mountain Brook.

French has been married for 25 years and has four children.  French grew up in Jackson in Clarke County.  “I chose Birmingham to be my home.”  French said that his oldest daughter is getting married in April and plans to stay in the Birmingham-Hoover metro area.

“Because of corruption and because of incompetence and indifference we have a 40 year problem.”  The massive $4.1 billion sewer debt that Jefferson County will be making payments on until 2053, (and most likely beyond).

French said, “I have signed the, No New Taxes pledge.  I believe in a zero tolerance on corruption.”  As a State Senator, “I went to the federal authorities and turned in someone (Sen. Harri Anne Smith, Independent from Slocumb) for trying to bribe me.  I testified in both trials.”

“I used to laugh at Louisiana (because of its national reputation for corruption) I can’t laugh anymore.”  If elected French promised a zero tolerance on corruption and to file a bill to end legislative immunity.  French said that we, “Need representatives to know that they are no different that the people they represent.”

When asked if he was opposed to Alabama’s adoption of the controversial Common Core educational standards, French said, “I am against Obamacare and Obamacore 100%.”

French said “If we get both houses (of the U.S. Congress) maybe we will have a more conservative government.”  “It is important to have conservatives in the (Republican) leadership.”

French said, “I am 100% for Second amendment.  “My campaign will have a raffle to give away a Remington shotgun, hopefully by the time of spring turkey season.”

French .joins a crowded House District 46 Republican Primary field that includes: attorney Justin Barkley, Pamela Blackmore-Jenkins, and David Faulkner.
HD 46 is currently represented by Paul DeMarco (R) from Homewood. Representative DeMarco has announced that he is seeking Alabama’s Sixth Congressional District seat being vacated by the retirement of Congressman Spencer Bachus (R) from Vestavia at the end of this current term. Therefore Alabama State House District 46 will be an open seat for the 2014 election cycle.

Hubbard Trial Day Six: “Not no, but Hell No!”