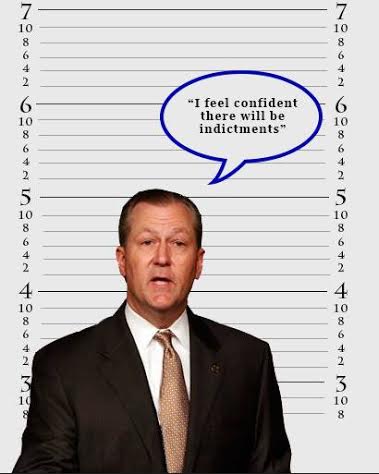 Four years ago this month, when Speaker of the House Mike Hubbard was the Chairman of the Alabama Republican Party, he made history making predictions. Even then, with no possibility of a public corruption investigation with himself as the suspect, his comments were news.

In mid 2010, the bingo investigation was bubbling to the surface of statewide attention, bringing to light widespread corruption on Goat Hill among lawmakers, businessmen, and lobbyists alike, resulting in the indictments of many, and the convictions of a few.

But, before any actual arrests were made or indictments were released, then ALGOP Chairman Mike Hubbard was making predictions. He had no inside information, he told media outlets, but the outcome of such a long investigation was common sense.

“I feel confident there’s going to be indictments,” Hubbard told ABC news on August 20, 2010, “I think it’s going to happen. I don’t think they would have invested this much time and energy investigating it if there’s not something to it.”

The Lee County Grand Jury has now been empaneled in Opelika for over a year. Dozens of lawmakers and lobbyists have testified, including Senate Pro Tem Del Marsh. The Grand Jury has already indicted two legislators: former Rep. Greg Wren resigned from office and plead guilty to only a misdemeanor in exchange for his testimony, and Rep. Barry Moore’s trial on felony perjury charges will begin this time next month.

A Lee County Circuit Court Judge even released an official letter signed by Attorney General Luther Strange specifically authorizing the investigation by the Grand Jury into the Speaker’s actions.

Still, Speaker Hubbard has admitted no wrongs and even claims to be the victim of a politically motivated attack from “liberal special interests.”

Like who, the Republican Attorney General Strange? I don’t think so.

Then-ALGOP Chairman Hubbard reminded us in 2010 that where there’s a lengthy investigation, there’s a crime. No reason not to believe him now. Where there’s smoke, there’s fire.

I think you’re right Mr. Speaker, but this time you’re on trial.