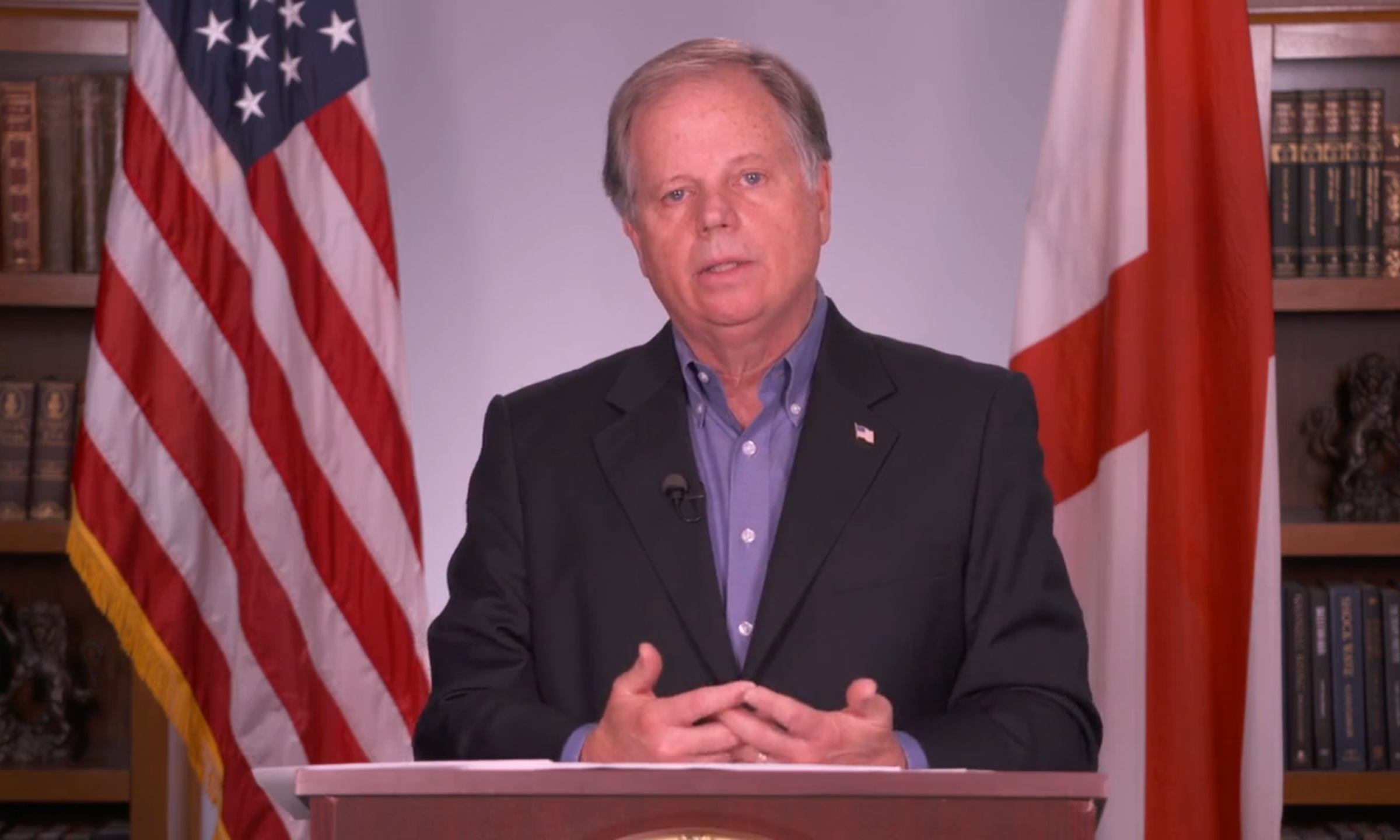 Until testing for COVID-19 is more broadly available it will be unclear the extent of the deadly virus’s reach throughout Alabama and the U.S., and difficult to safely determine when to fully reopen the economy.

That’s the message Sen. Doug Jones made during a press conference on Thursday, in which Jones and health experts from a Huntsville biomedical research campus discussed coronavirus testing as Alabama and other states work to determine when it’s safe to reverse more of the restrictions that health experts say have been successful at slowing the virus’s spread and saving lives.

Gov. Kay Ivey on Tuesday announced all retail businesses can reopen at 50 percent capacity at 5 p.m. on Thursday, but close-contact businesses will remain closed for now. It was a measured, partial rollback of her more restrictive “stay-at-home order” and done, she said, after looking closely at the data, health outcomes and after listening to public health experts.

“Once again I have applauded her for her thoughtfulness in doing this,” Jones said at Thursday’s press conference. “She is resisting the pressure to call for a complete reopening as some of the other states, and our neighboring states, have done. I think she’s doing it in a thoughtful way.”

But Jones said there remains much to be concerned about as the number of confirmed COVID-9 cases in the U.S. has reached more than 1 million, with more than 62,0000 deaths, and because testing in Alabama and across the country is still limited, those numbers may be too low.

“We can’t be lulled into complacency with trying to reopen, and without the ability to test in a much more significant way than we’re doing now,” Jones said.

As of Thursday afternoon, there were more than 7,000 confirmed COVID-19 cases across Alabama, and at least 269 deaths from the virus, but less than 2 percent of the state’s population had been tested since early March, according to the Alabama Department of Public Health.

Only 11 Alabama counties had tested more than 2 percent of their populations, and just one, Bibb County, had tested above 3 percent. As of Thursday, 3.1 percent of residents in Bibb County had been tested, according to ADPH data analyzed by APR.

As APR reported on Wednesday state public health officials continue to have problems getting the needed staffing, testing supplies and reagents used during testing. Currently, the state is testing an average of 1,000 people daily, the ADPH has estimated, though that number now seems to be rising, but it includes tests done at the state lab and at commercial labs.

Alabama State Health Officer Dr. Scott Harris told APR earlier this week that the state is aiming to test up to 50,000 each week, which would be about 1 percent of the population every week, and he thinks there’s enough capacity in all of the labs statewide to do so, but said “practically speaking, we’re nowhere near that.”

Jones said he sent Vice President Mike Pence a letter encouraging the White House’s coronavirus task force to conduct a national inventory of the country’s diagnostic test supply “and to release a detailed plan and timeline for addressing testing gaps in shortages.”

“Quite frankly, the answers that we’ve been getting on those issues from the White House have not been good. They’ve been totally incomplete,” Jones said. “So I think the American public, I think members of Congress, deserve to see what our national supply is, what our inventory is, and what their plan is going to be going forward if we’re going to open this country the way that everyone would like to get it back to.”

President Donald Trump on Monday announced the White House’s “blueprint” for increasing testing capacity, which leaves it up to the states to draft their own plans and for the federal government to be a “supplier of last resort.”

The federal plan drew quick criticism from those who worry the White House isn’t doing enough to help support testing efforts by the states.

“It’s got to be something that’s mandated by the federal government and then implemented by the states based on the federal government’s plan with the money that allows for the testing,” Pallone told The Washington Post. “You can’t have a reliance that somehow the chain drugstores are going to set up these testing sites voluntarily through their drive-through pharmacies. That’s what they promised last time. And it never happened. And it won’t happen because it’s not based on a national plan, it’s not enforceable, and they’re not providing the funding for it.”

Neil Lamb, vice president for educational outreach at HudsonAlpha, a nonprofit biotechnology research campus in Huntsville, said during the press conference with Jones that COVID-19 testing has been a challenge.

“And continues to be, but there are a number of players coming to the table now with tests that are rapid, that have a higher level of accuracy that at some point down the road may allow us to actually do testing from our homes. We are not at that point yet,” Lamb said.

Richard Myers, president and science director at HudsonAlpha, said researchers are working to create coronavirus tests that can be done using saliva, in addition to the existing nasal swab tests, but that testing overall must increase exponentially if we’re to get a handle on the virus.

“We don’t need to do just thousands of tests. We need to do millions of tests. Probably millions a day, or week at least, for the whole country,” Myers said.

Work is underway to create tests that give much faster results, and that can be done in batches of thousands and tens of thousands, instead of hundreds at a time, Myers said.

“I think we desperately need that,” Myers said, adding that he believes that’s possible to do with the science we have now.

Those new large batch tests might also not require the same supply chain of testing materials, which have been in short supply,  hampering the ability to test more broadly nationwide, Myers said.

“So that’s going to be an important part here. I think we will see this happening in the next few weeks, the ability to do this. And then the logistics of implementing that around the nation will be the hardest part, but even that’s being worked on as well,” Myers said.

Asked by reporter Brian Lyman at The Montgomery Advertiser whether, in absence of widespread testing, targeted testing, in which a sample of a community is tested, may be effective, Lamb said it could be.

“At least gives us some initial information about the potential spread, and/or the presence of antibodies within that population,” Lamb said.

Myers said such targeted testing could be implemented now, and that combined with the more rapid tests that run large batches at once and done cheaper “we could be doing this at a much, much higher level.”

“If we are able to do this on a really large scale, and the logistics have to be implemented for that,  then that will go a long way towards stemming the tide,” Myers said.

In addition to testing whether a person has COVID-19, there are tests that are meant to determine whether someone had the virus in the past and has built an immunity to the virus, known as antibody tests.

There are hundreds of such tests on the market, Myers said, and some may be accurate, but “most are not.” Researchers are working to determine which of those tests work the best, and for ways to test millions of people for those antibodies, rather than thousands.

Lamb said that data seems to suggest that those who were infected with coronavirus do produce some immunity to the virus.

“There might be some caveats to that, but it really looks like if you have been infected you are going to produce the antibodies, and it gives you some immunity,” Lamb said. “That immunity is not lifelong. It may be a series of months. It may be a couple of years.”