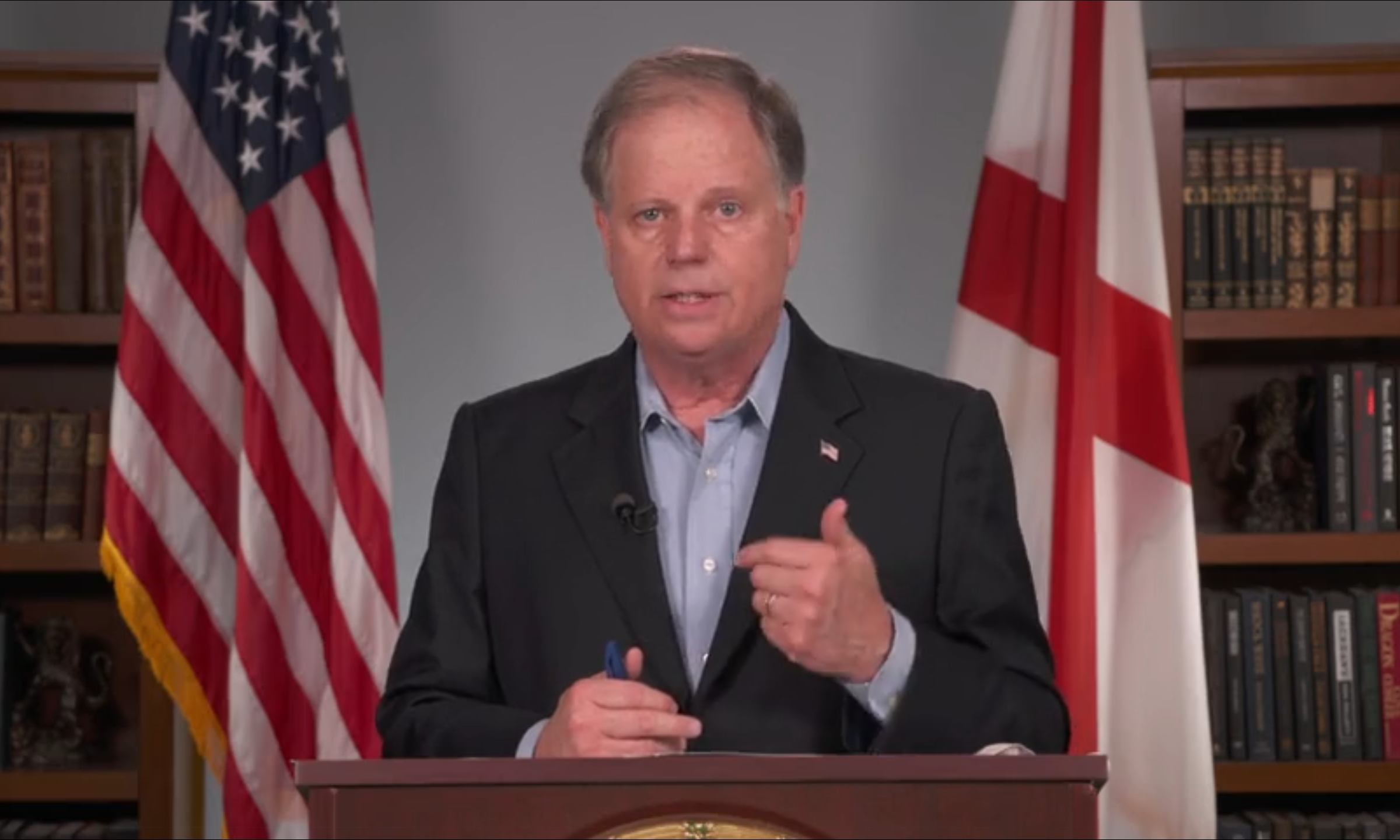 Sen. Doug Jones, D-Alabama, said Friday during a live-streamed press conference that the Senate should begin debating the next COVID-19 relief package, and Republicans in Congress should stop playing partisan politics with urgently needed COVID-19 relief.

“That bill is not perfect at all. There are a number of things in there that I don’t think will be in a final bill,” Jones said of the House’s $3 trillion HEROES Act. “It’s not perfect, but it is something to start talking about. It is a shame that Senate Republicans have made this into a partisan issue, trying to say that this was some kind of Democratic ‘wish list.’ It is not.”

The $3 trillion relief package includes nearly $1 trillion in aid to struggling state and local governments and another round of $1,200 payments to individual taxpayers and up to $6,000 per family.

The bill, which passed the House last week along partisan lines, appropriates billions for COVID-19 testing and contact-tracing and provides money for hazard pay for essential workers, among many other provisions its 1,800 pages.

“It is a wish list for cities and counties, which we’ve been talking about,” Jones said. “The first line essential workers that have been there that we don’t need to lose — so much of our workforces in city and county governments. It’s a wish list for the CDC and the NIH to continue funding for research, not just for a vaccine, but for therapeutics for how to treat this virus until we get that vaccine. It’s a wish list for businesses.”

The Paycheck Protection Program, which provides loans and grants to small businesses and nonprofit organizations, would also get additional funding in the new relief bill.

Jones has called for a plan to give small businesses another round of help in paying employees by using payroll processors instead of banks, which have, at times, been slow in delivering aid to businesses and have prioritized clients with whom the banks had a pre-existing relationship.

Jones urged lawmakers to consider using payroll companies rather than banks when the first installment of the Payroll Protection Program was taking shape.

The House’s HEROES Act also includes provisions that clarify PPP provisions for small businesses and would ensure that PPP funding can reach underserved communities and nonprofits. It adds $10 billion for emergency grants through the Economic Injury Disaster Loan Program.

“It has a form of the program that we have — not as scaled up as much as I would lie, but it’s got a program that will help keep businesses operating and their payroll operating as a supplement, an add on to the Payroll Protection Program,” Jones said. “So it’s a wish list, really, for the American people. It’s just a shame that it has been politicized as partisan, because it should not. None of this should be partisan.”

President Donald Trump has threatened to veto the House-passed legislation were the Senate to pass it, and House and Senate Republicans have decried the legislation as too expansive.

Republicans have particularly opposed provisions in the bill that would require all voters to be able to vote by mail beginning in November and another that would temporarily repeal a provision of the 2017 Republican tax law that limited federal deductions for state and local taxes.

Trump has also opposed a provision in the bill that would provide $25 billion for the U.S. Postal Service, which has struggled amid the COVID-19 crisis and could become insolvent without support.

The HEROES Act was declared by some as “dead on arrival” in the Republican-controlled Senate. Senate Majority Leader Mitch McConnell, R-Kentucky, has so far refused to take up the bill. Senators returned back to their home states this week until early June.

“The goal when we get back is maybe … enough talks will be going on, that we can pass some legislation in a bipartisan way,” Jones said. “Because there is an urgency.”

Jones said he didn’t believe the bill would pass as it is currently written, and that he doesn’t know what the final version would look like, but “we need to be talking about it. It’s a starting point,” he said.

The legislation also provides $75 billion for COVID-19 testing and contact tracing, which public health experts say are essential for reopening the economy safely and avoiding a second wave of the virus in the fall.

Jones urged Alabamians to continue adhering to social-distancing guidelines, to listen to public health officials and to wear masks. He said reopening the economy and preserving public health don’t have to be at odds.

“I think the governor has done as great a job as she could to try to be very strategic, to be thoughtful on how to do this,” Jones said. “Unfortunately, I also believe that a lot of people in Alabama are only hearing part of her message. They’re only hearing the message that you can go to church, you can go to the theater, you can go out to eat, and they’re not listening as much to the messages about personal responsibility.”