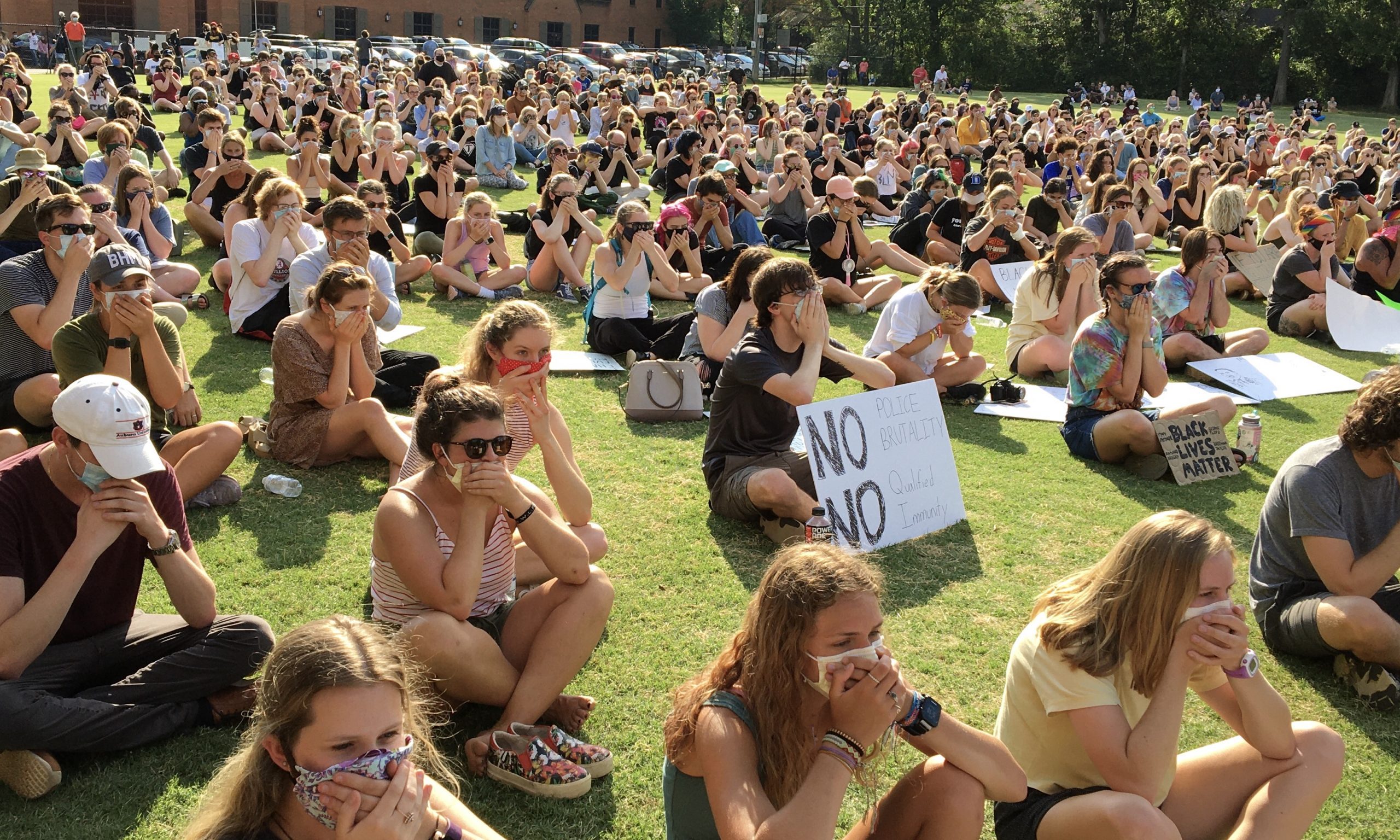 Allison Coleman asked for a reporter’s pen and wrote a cell number on a bit of paper as she stood among the several hundred people gathered in Mountain Brook to protest police brutality and the death of George Floyd by a Minneapolis police officer.

The Birmingham resident said she needed the number to call a friend if she was arrested, and that she’s kept up with other recent protests in Alabama, including one in Huntsville on Wednesday where police fired tear gas and rubber bullets into a crowd of peaceful protestors. 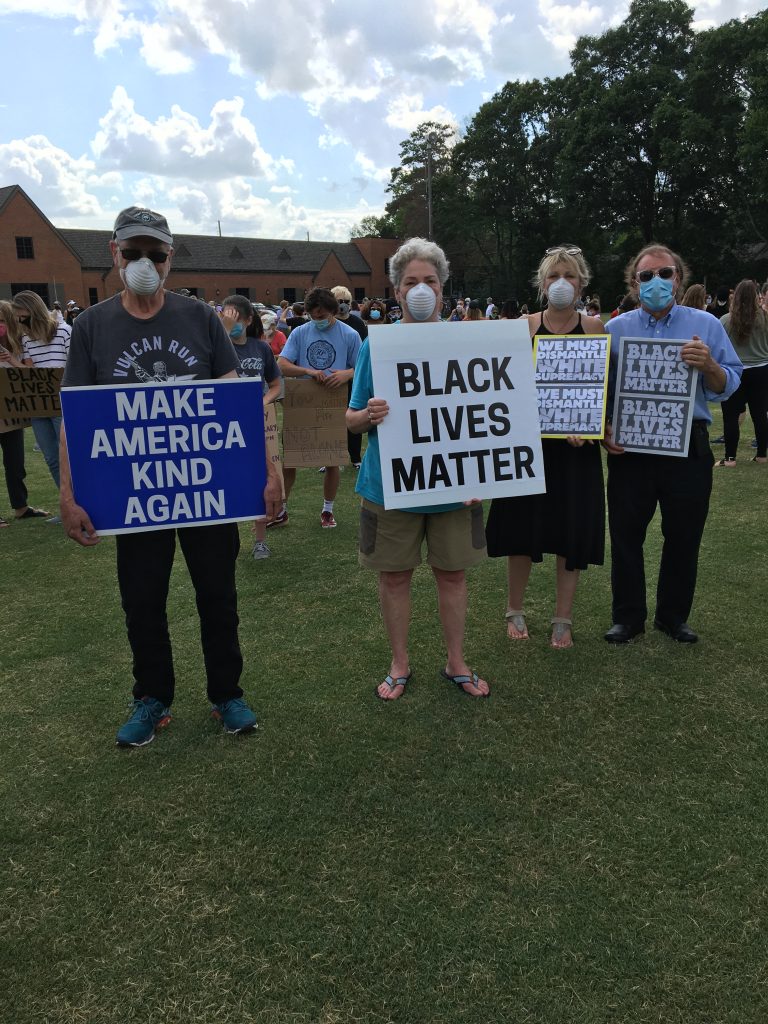 She’s protested before, over the reproductive rights of women, but these latest protests over the killing of George Floyd gave her pause.

Two journalists with AL.com were taken into custody by police while working outside the Birmingham City Hall Wednesday night, and police arrested a few people in Linn Park for violating curfew.

Police in Huntsville Wednesday evening fired gas canisters and rubber bullets into peaceful protestors at the courthouse square more than an hour after that city’s curfew ended, injuring some, including a small child. Some protestors moved on to Big Spring Park near Huntsville’s Von Braun Center where tear gas was again shot into the crowd.

But there was no tear gas or rubber bullets fired on protestors at Thursday’s demonstration, held in a field at Crestline Elementary School in the wealthy Birmingham suburb.

Mountain Brook Police officers dotted the perimeter around the school but stayed largely out of sight as members of the group Alabama Rally Against Injustice led the many hundreds in song and demonstrations meant to convey the scope of the problem.

Max Michael, 74, was among them. Wearing a mask — almost everyone was — the Birmingham resident stood, sign in hand, with a small group.

“It just seemed like the perfect opportunity to come and show support. Solidarity,” Michael said.

He said he’s also kept up with recent protests, including the violent end of the protest in Huntsville, and said the use of tear gas was inappropriate.

“As everybody is saying, it’s a Constitutional right. It’s the founding principal of this country to be able to express civil disobedience, and not get shot at,” Michael said. 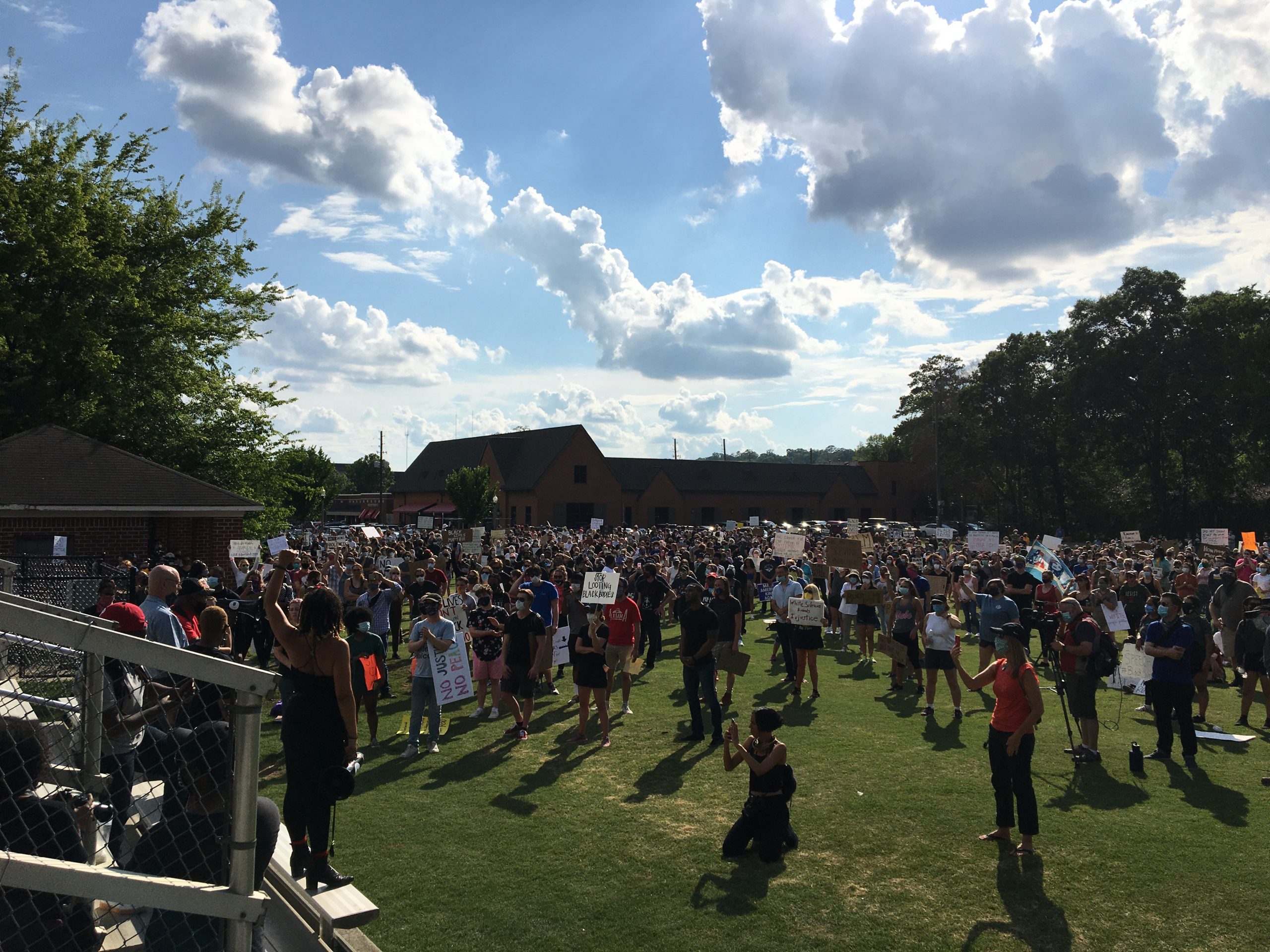 Michael said he feels it’s a tough balance of being able to express oneself safely knowing there are people out there who want to create havoc.

“I think the mayor, as well as other people, are acting on caution,” Michael said, referring to Birmingham Mayor Randall Woodfin’s decision to enact a citywide curfew and limit permitted demonstrations to a single city park.

Woodfin amended his proclamation of a state of emergency on Tuesday that enacted a city-wide curfew and banned demonstrations and marches on city roads and property while the proclamation remains in effect.

Woodfin’s change banned demonstrations 24 hours a day until the end of the state of emergency, but on Wednesday he announced the city has selected  W.C. Patton Park for properly permitted demonstrations.

“Our communities of color have been inundated with injustices, health disparities, lack of access to food and secure neighborhoods,” said organizer Celida Soto speaking to the crowd over a megaphone.

George Floyd’s death is a catalyst, but the problem is much bigger, she said.

Perhaps it will take watching black and white protestors standing alongside one another and being shot with rubber bullets and tear-gassed to make a lasting change this time, Coleman said after the protest.

Perhaps this time young white women like herself will see the problem for what it is, and help drive the change the country needs. Perhaps the fear of being shot and gassed while peacefully protesting will be what the country needs.

“I’m grateful for the fear,” she said.

Advertisement. Scroll to continue reading.
In this article:featured2,George Floyd,Mountain Brook