Two large labs were improperly reporting COVID-19 testing data to the Alabama Department of Public Health, and a data dump from those labs resulted in the state’s largest single day spike in new daily cases on Sept. 25 when 2,452 cases were reported.

Alabama State Health Officer Dr. Scott Harris told APR on Tuesday that once those two labs sent in a mass of old test results electronically to ADPH — almost all of them point-of-care antigen tests — those results caused the spike in new daily cases.

“ADPH continues to make all efforts possible to identify new labs and bring them into the electronic reporting process in order to capture the positive and negative labs for case investigation and data accuracy,” the department said in a statement regarding the recent data dump.

In addition to the large batch of backlogged positive antigen tests on Sept. 25, the state has also begun including probable tests — largely those positives from antigen tests — in both its statewide and county-by-county data, which APR uses to populate its charts. The state began reporting probable cases and deaths on the statewide level on May 30, and began including those totals in graphs on Sept. 1. 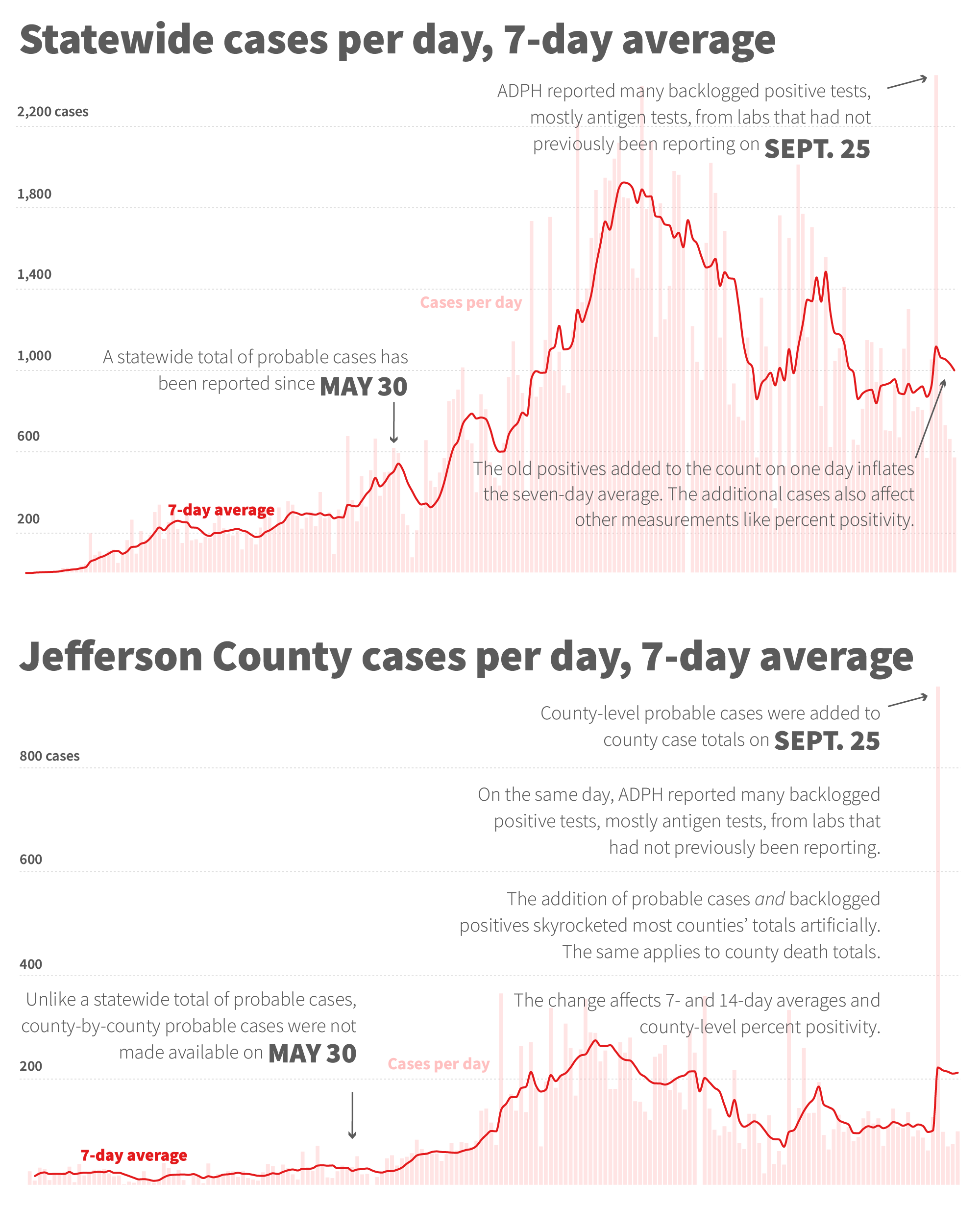 (Because ADPH has been reporting probable cases and deaths since May 30, APR was able to adjust our charts back to May 30 beginning Sept. 1 without the addition of the probable cases causing a huge spike.)

On the county level, though, probable cases and deaths were not reported at all until Sept. 25, when the full total of every probable case was added to county charts. The addition of those probable cases made some counties appear to have even larger spikes than the statewide increase on Sept. 25, which was already the largest increase to date because of the backlogged positives from the labs improperly reporting positives.

(The addition of the new probable cases have also affected other measures APR calculates based on those cumulative and daily totals including seven-day averages, 14-day averages and percent positivity.)

For example, many counties over the past week have reported more positive cases than total tests, which would be impossible without the data delay and the addition of probable cases. Some counties, like Lee County and Tuscaloosa County, showed such large increases on Sept. 25 that their positive totals on that day alone appear to outmatch the statewide increase.

That, again, is because the statewide total was already including probable cases beginning Sept. 1 and daily probable data was available back to May 30, but county level data did not include probable cases until Sept. 25.

Harris said it’s not uncommon for some labs to hold off reporting test results for a couple of weeks, then submit them all at once. Smaller commercial labs that don’t amass many tests often wait until a batch has been accumulated to submit.

Two labs sent in a large batch of older negative test results to the state in August, which skewed charts that use that data to track new daily tests and percent positivity. A similar artificial dip and spike in statewide COVID-19 data in early June was the result of computer system problems.

Speaking on the current state of COVID-19 in Alabama, Harris said “we’re cautiously optimistic about where we are” and noted that unlike the spike in new cases, hospitalizations and deaths statewide after Memorial Day into July, the most recent Labor Day holiday does not seem to have resulted in larger numbers.

“We did not appreciate a big spike after Labor Day, which was very, very encouraging,” Harris said.

Harris noted that the state hasn’t imposed any new restrictions since May, other than the statewide mask order in mid-July, which was followed by a decline of new confirmed COVID-19 cases.

“I will say, we still have room to improve. The hospital numbers now are about half of where they were in early August,” Harris said. “Yet they’re still a lot higher than they were back in the spring, so I wish we would continue to see more improvement, but I think we’re definitely much better than we were a couple of months ago.”

Gov. Kay Ivey’s statewide mask order is set to expire Friday, but Ivey and Harris are expected to make an announcement about whether it will be extended. Harris said Ivey’s coronavirus task force is to have a conference call Tuesday afternoon and that an announcement would likely come soon.