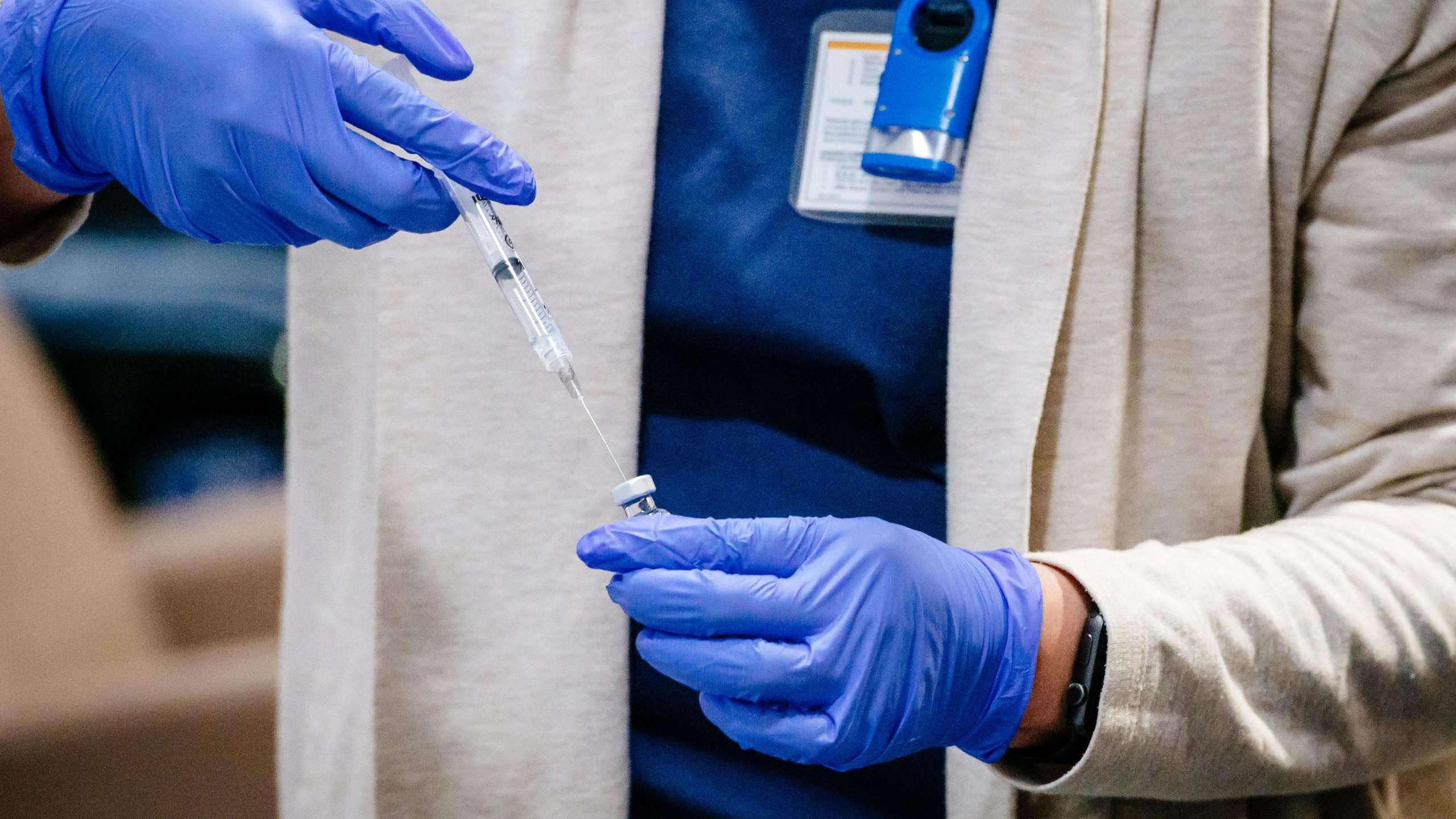 A provider prepares to deliver the COVID-19 vaccine to a recipient. (VIA UAB)

As COVID-19 vaccinations of medical workers, nursing home residents and staff continue this week, public health officials in Alabama have plans for how they’ll inform other segments of the public when their time comes.

Dr. Karen Landers, assistant state health officer at the Alabama Department of Public Health, told APR by phone on Tuesday that the department has myriad ways in which to communicate to the public as the vaccination plan rolls through the different phases.

The state remains in phase 1a, which covers health care workers, of which there are approximately 300,000 statewide, and nursing home residents, estimated at 22,684 last year, according to the Kaiser Family Foundation.

According to ADPH’s vaccination plan, phase 1b is to include those 75 and older, firefighters and police officers, corrections officers, food and agriculture workers, U.S. Postal Service workers, manufacturing workers, grocery store workers, public transit workers, school teachers and support staff members, child care workers and those living in congregate settings, including but not limited to homeless shelters, group homes, prisons or jail.

“ADPH does not have a timeline on this as ability to move to the next Phase is dependent on vaccine supply,” the department’s website states, regarding moving between phases.

Phase 1c includes vaccinating those aged 65-74, those between the ages of 16-64 who have high-risk medical conditions and other workers deemed essential, which include transportation and logistics, waste and wastewater, food service, shelter and housing (construction), finance (bank tellers), information technology and communication, energy, legal, media, public safety (engineers), and public health workers. Lastly, phase 2 includes all others not covered in previous phases and the general public.

“We’re very active on social media, but we do recognize that there are many persons in the older age group that are not on social media,” Landers said when discussing plans to inform the public as the department’s plan rolls out.

“A lot of people want to take the vaccine, and we want them to take it, but obviously we’ve got about 300,000 healthcare workers we’ve got to work through that group initially, and then move down to our categories,” Landers said.

As of Monday, approximately 15 percent of the state’s 128,175 combined doses of both the Pfizer and Moderna vaccines had been administered, according to ADPH’s vaccination dashboard. Landers said the pace of vaccinations is expected to increase in the days ahead as county health departments began administering vaccines on Monday.

Dr. Jeanne Marrazzo, director of UAB’s infectious diseases division, told reporters on Tuesday that vaccinations at hospitals that have those vaccines, which include UAB Hospital, have been going very well.

“It’s incredible. It’s a one-way system, and it has really gone very very well,” Marrazzo said of UAB’s vaccination system, which ushers those health care workers through the process and into a waiting area where they’re monitored for 15 minutes to ensure they don’t have adverse reactions.

Marrazzo said it has been challenging to notify people when it’s their time to get vaccinated, however.

“It’s really hard, and I think people have done an amazing job, considering all the legitimate challenges,” Marrazzo said.

Marrazzo noted, however, that the nationwide rollout of vaccines is not happening as quickly as they’d hoped.

“We’ve known vaccines were going to be available for a while, and yet it’s taking a really long time to ramp up, to get it where it needs to be, and I don’t think anyone is particularly happy with that,” Marrazzo said.

Dr. Leana Wen, an emergency physician and professor at the George Washington University School of Public Health, in a tweet Tuesday noted the lagging rate of vaccinations nationwide.

President-elect Joe Biden in a speech Tuesday said the Trump administration’s vaccine rollout has been too slow and warned of the challenges ahead.

“This will take more time than anyone would like and more time than the promises from the Trump administration have suggested,” Biden said. “This is going to be the greatest operational challenge we’ve ever faced as a nation but we are going to get it done. It’s going to take a vast new effort that is not yet underway.”

Alabama on Tuesday broke yet another COVID-19 hospitalization record, and Marrazzo said that heavy travel over Christmas will likely result in “a spike on top of a surge on top of a spike.”