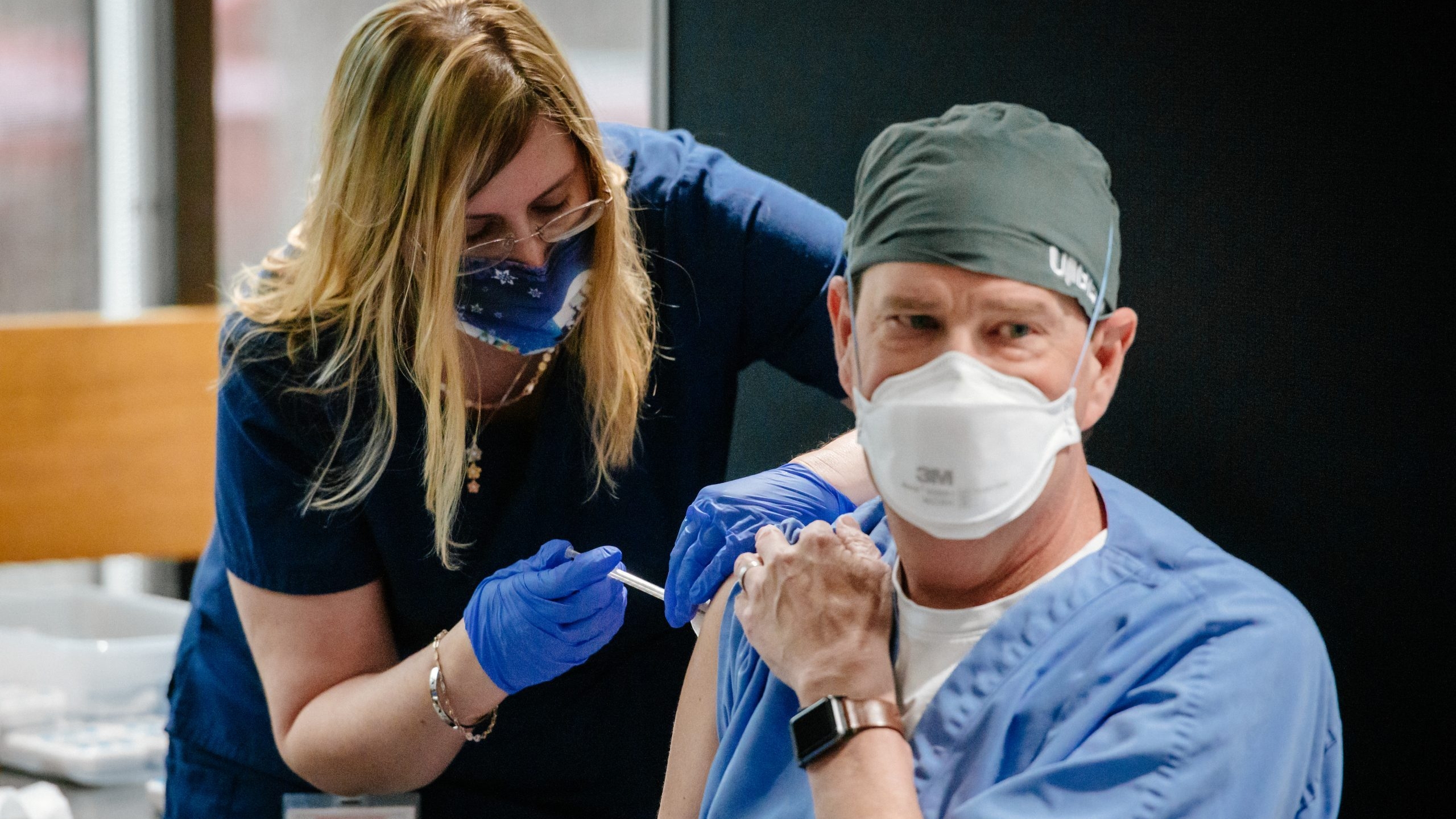 A physician at UAB receiving the COVID-19 vaccine. VIA UAB)

The Alabama Department of Public Health on Tuesday published the department’s COVID-19 vaccine distribution dashboard, and while just 15 percent of the state’s vaccine supply had been administered as of Monday, a public health official said the pace should quicken in the coming days.

Is it safe? Debunking myths about the COVID-19 vaccine
Health care experts at UAB debunk common myths and set the record straight that the vaccine is safe.

Currently, only at-risk medical workers and hospital staff, some other at-risk emergency medical workers and residents and staff at nursing homes are receiving vaccinations, according to the Alabama Department of Public Health’s plan, which is guided by the CDC’s Advisory Committee on Immunization Practices.

Dr. Karen Landers, assistant state health officer at the Alabama Department of Public Health, told APR by phone on Tuesday that vaccinations in the state began just two weeks ago, and that all of the county health departments just began administering the Moderna vaccine on Monday, which she said should speed the pace of vaccinations.

“Just administering the vaccine to that number of people in and of itself requires quite a bit of logistics,” Landers said.

Landers said she spoke to several pharmacies on Monday that are working on their plans to begin administering vaccines, which requires those pharmacies to have a place where they can monitor a person for up to 30 minutes after vaccinations, and the necessary social distancing requirements for those awaiting vaccinations. She expects pharmacies to begin vaccinations in the next week or so, Landers said.

Landers said vaccinations slowed on Christmas Eve and Christmas Day as well, which resulted in lower overall numbers, and said “I expect the numbers this week will go up significantly.”

Dr. Jeanne Marrazzo, director of UAB’s infectious diseases division, told reporters on Tuesday that administering the Pfizer vaccine has been challenging, both because of the ultracold storage requirements, the timeline for using the vaccines once thawed, and because it ships in allotments of more than 900 doses.

“So when you do that you are putting yourself on a very tight schedule to get that vaccine administered before that time runs out,” Marrazzo said, adding that UAB has vaccinated more than 6,000 people to date.

UAB Hospital received 10,000 doses of the Pfizer vaccine, 5,000 of which were to be allocated for UAB Hospital staff with the remaining doses to be administered to staff at other area hospitals and freestanding clinics. Marrazzo said she’s unsure when UAB will get its second shipment of the Pfizer vaccine and is also expecting a first shipment of the Moderna vaccine, which could happen at any moment.

“That said, is the roll-out nationally going as quickly as we would have hoped? No,” Marrazzo said. “We’ve known vaccines were going to be available for a while, and yet it’s taking a really long time to ramp up, to get it where it needs to be, and I don’t think anyone is particularly happy with that.”

“You can find probably a number of flaws in the system, and of course somebody will tell the story in a year or so about what really happened, and we’ll do an analysis, but no. I don’t think it’s happening as quickly as we like, for sure,” Marrazzo said.

Officials with President Donald Trump’s Operation Warp Speed had predicted that 20 million doses would be shipped to states by the end of December, but according to the CDC just 11.4 million doses have been shipped and 2.1 million people administered vaccines as of Monday.

Public health officials at ADPH learned on Dec. 16 that the state’s second shipment of the Pfizer vaccine would be reduced by 19,500 doses. Alabama State Health Officer Dr. Scott Harris told APR at the time that he hadn’t gotten a straight answer from the federal government as to why the state’s expected shipment was being reduced. Alabama is one of the numerous states reporting similar reductions in second shipments.

“That makes it pretty challenging,” Harris said of planning for vaccine rollout after the unexpected reduction.

Marrazzo cautioned those who are receiving vaccinations against letting down their guards when it comes to wearing masks and social distancing, noting that it’s not yet clear how long immunity lasts with these vaccines.

“We are emphasizing that the vaccine is not a passport to a mask free society,” Marrazzo said.