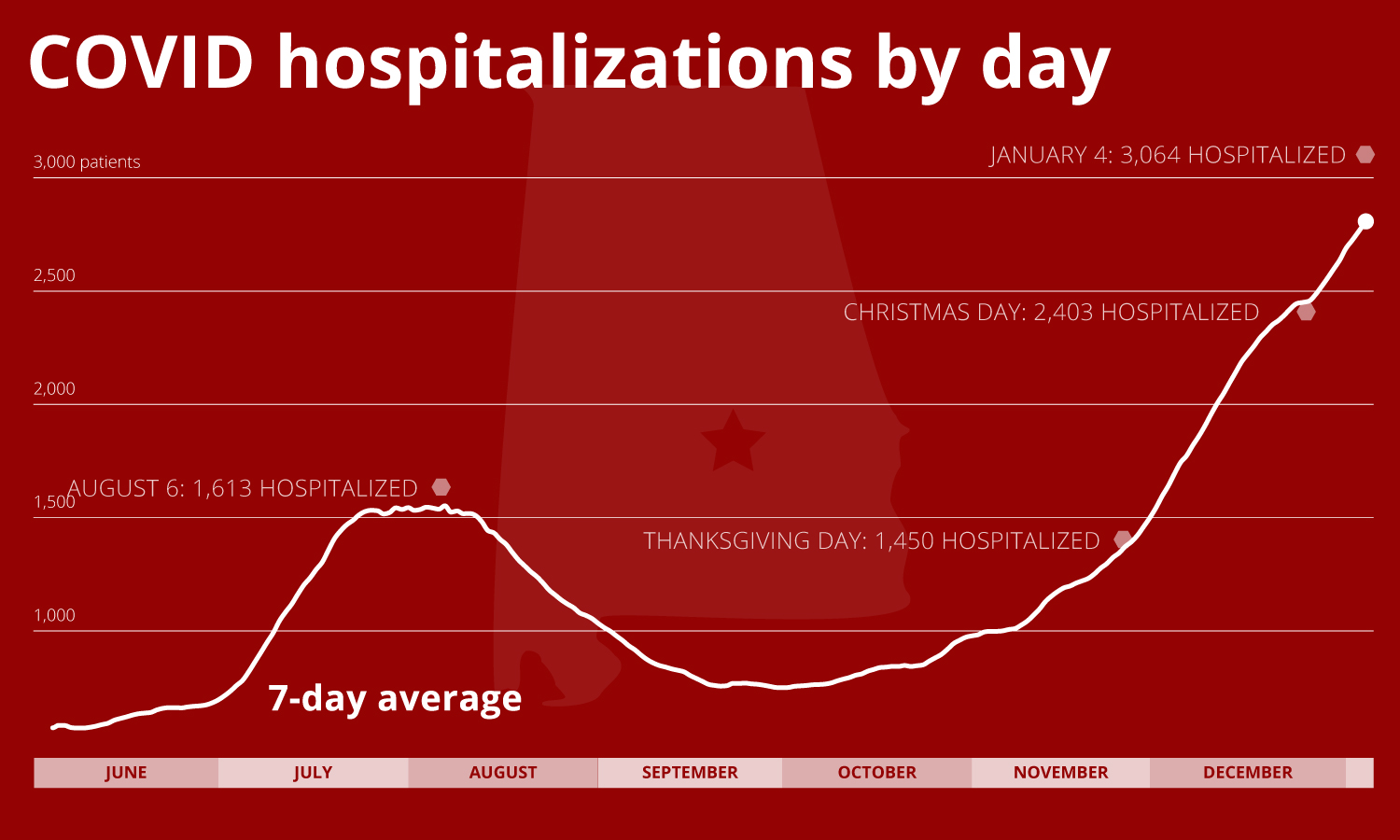 Alabama on Monday set a new COVID-19 hospitalization record when, for the first time, more than 3,000 patients were in hospitals being treated for the virus and just 10 percent of the state’s intensive care beds were available.

COVID-19 hospitalizations in Alabama were at 3,064 on Monday, an increase of 50 percent over the last month, while cases and newly reported deaths have also surged in recent weeks.

Alabama’s ICU beds were at 90 percent capacity on Monday, according to the U.S. Department of Health and Human Services. The Huntsville Hospital System had a record 507 COVID-19 patients on Monday, and UAB was caring for 221 coronavirus patients, just under its record of 226 on Sunday.

Testing remains low, as evidenced by an average 47 percent positivity rate over the last week. Public health experts say that rate needs to be below 5 percent or cases are going undetected.

The state averaged 3,743 new cases each day over the last week, a 94 percent increase over the highest seven-day average for new daily cases during Alabama’s summer surge. That’s despite delays in reporting over the last two weeks because of the holidays.

Deaths, as reported by the Alabama Department of Public Health, are more difficult to track in a timely manner, as it takes some time for the department to review records and verify the death was due to COVID-19. That can take weeks and sometimes months to complete, but December is likely to be the deadliest month so far once all deaths are reported.

Dr. Jeanne Marrazzo, director of UAB’s infectious diseases division, told reporters last week that hospital staff are being “pushed to the limits” and warned of a possible “spike on top of a surge on top of a spike” following holiday gatherings over Christmas and New Year’s.

“We had the call in some of our infectious disease fellows to help run some of the teams in the intensive care units,” Marrazzo said. “I can tell you the young physicians are really feeling this pain. When you are taking care of so many people for whom we have so little to do, it’s really, really just kind of exhausting.”