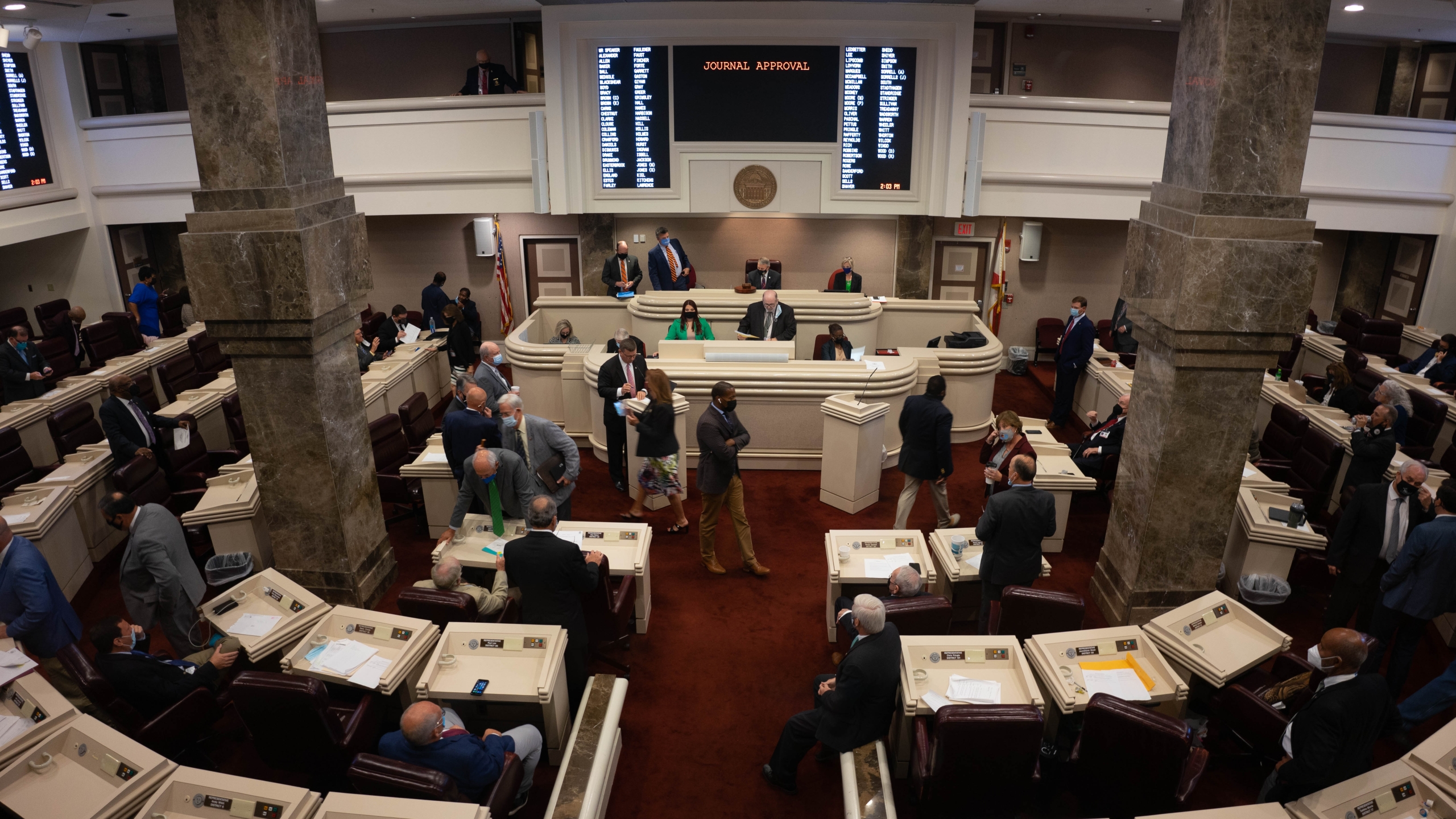 Alabama lawmakers approved a $1.3 billion prison construction plan in a special session last week, which some of those legislators described as a first step to addressing the federal government’s concerns over Alabama’s deadly prisons for men.

The session ended with just one reform measure making it out alive, however, and without more of those reforms many worry the state won’t come close to fixing what the U.S. Department of Justice in a lawsuit against the state says are systemic problems of violence between the incarcerated and at the hands of officers, drugs, corruption and a practice of covering up wrongdoings.

Rep. Jim Hill, R-Moody, a retired St. Clair County judge and Chairman of the House Judiciary Committee, has championed a number of reform bills, including the lone bill that was passed during last week’s special session and another that lost Republican lawmakers’ support in the closing days of the session.

Hill discussed with APR on Tuesday those bills, his thoughts on what needs to happen to address the DOJ’s concerns and what he expects to see in the next regular session.

Hill introduced House Bill 1, which would have impacted certain incarcerated people sentenced before the presumptive sentencing guideline changes in 2013 by allowing them to file for resentencing under the current presumptive sentencing guidelines, which could result in a reduction in their sentences. He introduced the same bill during the regular session this year, and it was passed by the House and made it out of the Senate Judiciary Committee, but never got a full vote in the Senate.

The House passed HB 1 in the special session, but before Hill could bring it to the Senate, Republican lawmakers’ support for the bill caved, and Hill decided not to introduce it for a vote.

Hill and APR both have heard from those familiar with the matter that HB 1 lost support after district attorneys expressed opposition because the legislation would have increased their workloads as they processed those incarcerated people through the process of having their sentences revisited. Hill said he’s unsure if it was in fact pushback from DA’s that prompted Republicans to pull support for his bill, but expressed frustration over those unwilling to do their jobs.

“I spent 19 years on the bench, and I spent 45 years being a lawyer, and doing my job has never been an impediment to me. It’s why you get paid. It’s what you’re supposed to do,” Hill said, adding he’s never apologized for asking someone to do their job.

Hill’s House Bill 2 was approved during the special session, which will increase the number of incarcerated individuals required to be released and supervised prior to the end of their sentence. The bill also requires those released under the legislation to be monitored electronically. The bill makes a 2015 law retroactive for those convicted before the 2015 law was enacted. Both bills passed the House last year, but failed to pass in the Senate before the session ended.

“The point that sometimes we miss is that 95 percent of the people that we put in prison are going to be released,” Hill said. “And I realize there’s always going to be a tension between, what do we do with people in prison, and how do we maintain public safety, because those are almost alternative universes but they’re both very important.”

Statistics show that people who leave prison are most susceptible to reoffend during their first year of release, Hill said. House Bill 2 ensures that those persons released will be monitored and overseen by the Alabama Bureau of Pardons and Paroles, and establishes mandatory electronic monitoring made possible by the Legislature’s earlier allocation of $800,000 for that purpose.

“It’s important that we keep up with them. Where they are and what they’re up to,” Hill said. “If an individual ends this sentence, then at that point you have absolutely no ability to monitor them.”

Hill said he believes House Bill 2 to be more important than House Bill 1, which he said presented “an opportunity, not the guarantee” for an incarcerated person who were sentenced prior to 2013 to have their sentences revisited by a judge to reflect changes in sentencing laws.

Hill said he plans to refile a bill in the next session that would establish a community punishment and corrections program in at least one county in every circuit statewide.

“I think community corrections is a wonderful tool that we have for judges to do alternative sentencing, to keep people in the community, to randomly drug screen them,” Hill said. “It’s not necessarily for violent criminals, but it certainly is a tool to work people back out of prison or to defer them before they get into prison.”

“In more rural counties, you know them,” Hill said of judges’ familiarity with defendants. “You probably know their parents and grandparents. You also have an idea of what their propensities are. Not always, and you certainly don’t bat 1,000 but there are times that we’re able to deal with somebody in a manner that doesn’t send them back to the penitentiary for 10 years.”

Alabama prisons are notoriously deadly, and among the deadliest in the state is the maximum-security St. Clair Correctional Facility in Hill’s home county of St. Clair. Hill noted that the prison is overpopulated, and the majority of those serving in the prison are serving life without the possibility of parole sentences.

“We have a very dangerous prison population. You really like to not send somebody into that situation and environment,” Hill said.

Some lawmakers are pushing for much more criminal justice reform measures than have been passed to date, which they say are critical to addressing the DOJ’s concerns, to the proper treatment of the incarcerated and to increase safety for prisoners and staff alike.

Of the state’s 22,896 inmates, 502 were serving life without the possibility of parole under the Habitual Felony Offender Act, according to the Alabama Department of Corrections’ latest monthly report. The law also increases sentences for thousands more in Alabama’s prisons, with 21 percent of all convicted under the law serving 20-year sentences.

England’s bill to repeal the Habitual Felony Offender Act made it out of the House Judiciary Committee during the regular session this year but stalled in the Senate.

Hill said if that bill and other reform bills are introduced, they’ll come to the House Judiciary Committee.

“We will do our best to give them a fair hearing,” Hill said.

Hill explained that he wouldn’t be surprised to see broader reform bills introduced in the next session, in addition to bills that address the state’s pardons and paroles.

There’s also a growing racial divide in who is and isn’t getting released on parole in Alabama. Concern over the matter has the incarcerated, their families and some lawmakers calling for major reforms.

Hill said he would like to see the state fund and hire more parole officers, whom he said are critical to providing needed oversight of those released.

“We need more individuals monitoring the people that we let out of prisons. We don’t need them to have a caseloads that totally overburden them, so that they can’t do their jobs well,” Hill said.

The DOJ’s concerns over Alabama’s prisons for men came up frequently during the special session. Democrats throughout the debates pushed back on the notion by many Republicans that the new prisons would solve, or at least begin to, the state’s prison crisis.

Lawmakers in the special session approved the $1.3 billion plan to build two new 4,000-bed prisons for men would be located in Escambia and Elmore counties, and a new prison for women would be located in Elmore County and would replace the Julia Tutwiler Prison for Women, but the bills don’t include separate funding for construction of the new women’s prison.

The plan also calls for using $400 in federal COVID aid to help pay for those new prisons, which didn’t sit well with some Democrat legislators who said the money would be better used to bolster the state’s health care system and help those who’ve suffered during the pandemic.

“I think we need to look at the concerns they have and I think we need to do the best we can to address those,” Hill said of the DOJ’s concerns, explaining that he believes a part of the solution is to construct new prisons that address the state’s dilapidated existing prisons, many of which house the incarcerated in barrack-like dormitories.

“Our prisons are antiquated, and they weren’t built to deal with the types of individuals that we’re now asking them to deal with,” Hill said.

Newly-designed prisons will better protect the incarcerated and prison staff, Hill said. Lawmakers have said the new prisons will contain cells rather than open dorms, but will not add bed space to Alabama’s prisons. The legislation includes shuttering four existing prisons.

Speaking on the possibility of a federal takeover of Alabama’s prisons, Hill said he’s been involved in a situation where federal judges have dictated solutions.

“And I’m not saying they’ve always been horrible, but I am saying, they’ve generally been more expensive,” Hill said. “And sometimes I think we can get to the core of the problem in a manner that’s more efficient and just better than they can.”