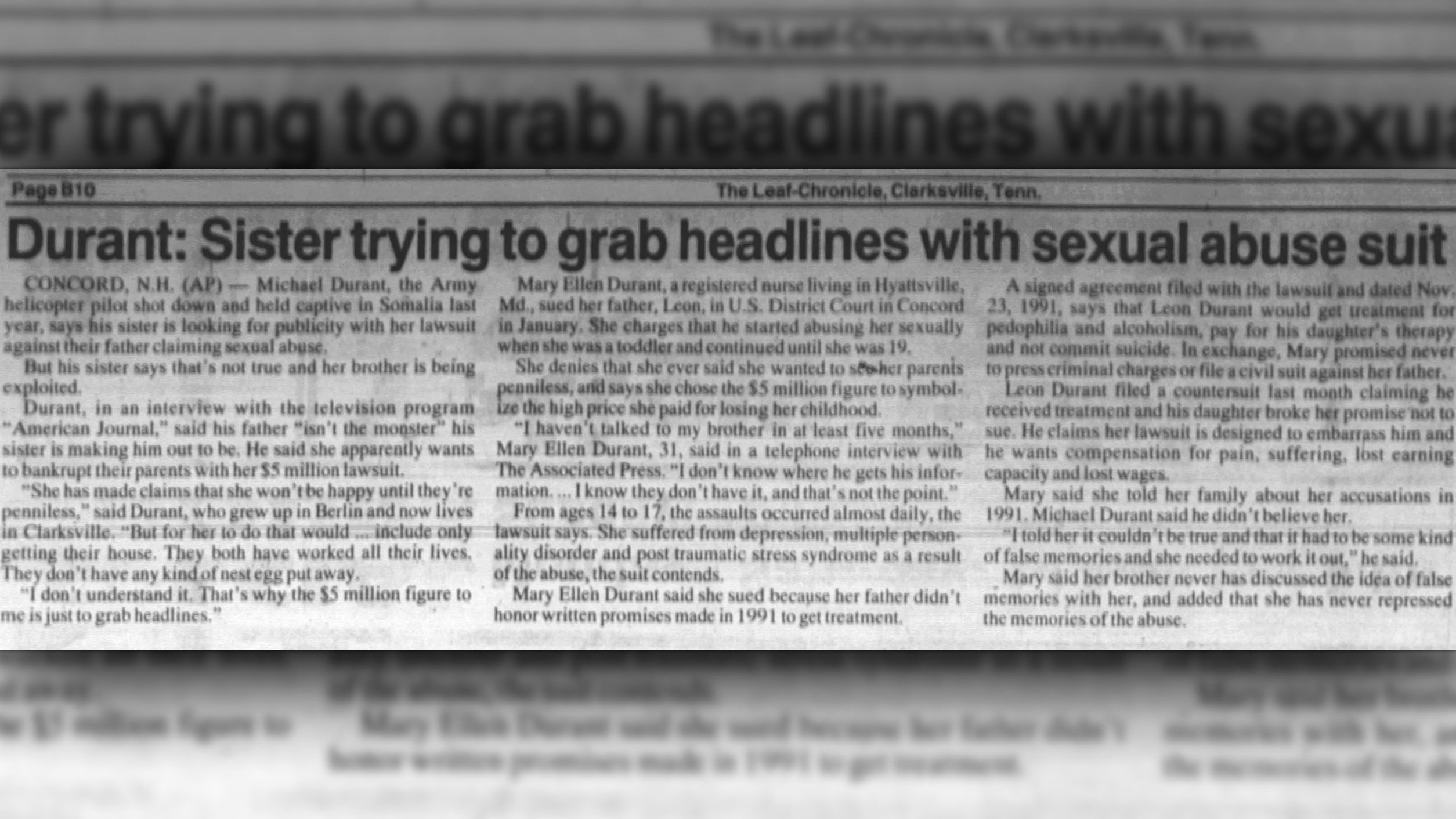 Senate candidate Michael Durant, in stories reported by the Associated Press, publicly accused his sister of lying about years of sexual abuse at the hands of their father despite telling his sister in letters that their father had admitted to the abuse.

The stories, first reported by AP in the mid-1990s following Durant’s release from captivity as a prisoner of war in Somalia and at a time when he became a national figure, were widely disseminated and appeared in numerous newspapers across the country.

Durant’s sister, Mary Durant, filed a federal civil lawsuit against their father, Leon Durant, in New Hampshire in 1994. In that filing, Mary Durant accused her father of sexually assaulting her from the time she was a toddler until she was 19. The lawsuit stated that the assaults on Mary Durant occurred “almost daily” between the ages of 14 and 17.

When interviewed on a TV news show in 1994, Michael Durant claimed that his sister was only trying to “grab headlines” by suing their father for $5 million. He also said his father “isn’t the monster” he was made out to be by Mary Durant, and that he was “a good father.”

Durant also said during the TV interview that the allegations against his father “couldn’t be true” and that he told his sister that “it had to be some kind of false memories and she needed to work it out.”

However, in a follow-up story, Mary Durant supplied AP with letters that Michael Durant had written to her in 1991, in which he states that their father admitted the abuse. 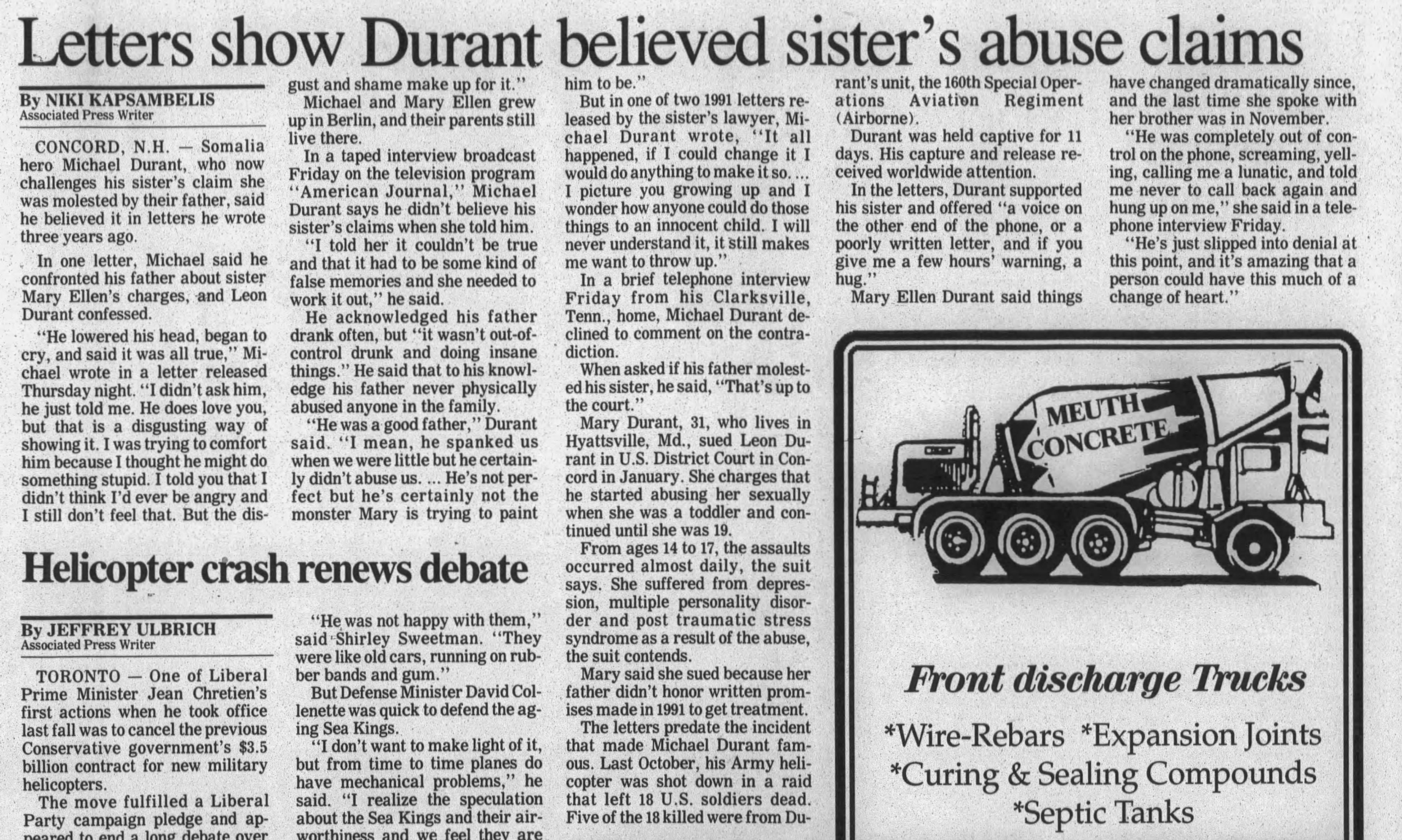 An Associated Press story published in The Messenger on Saturday, April 30, 1994.

“He lowered his head, began to cry and said it was all true,” AP reported one letter from Durant to his sister read. “I didn’t ask him, he just told me. He does love you but that is a disgusting way of showing it.”

In another letter, Michael Durant wrote: “It all happened. If I could change it I would do anything to make it so …. I picture you growing up and I wonder how anyone could do that to an innocent child. I will never understand it. It makes me want to throw up.”

When contacted by APR at her home in North Carolina, Mary Durant, who has since married and is now Mary Ryan, said everything in the AP stories is true and that her brother has never attempted to make amends for his about-face.

“Everything you’ve said (from the AP stories) is all true,” Mary Ryan said. “No one from my family has ever apologized to me for anything.” 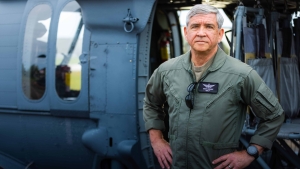 Ryan declined to comment further for now but later issued a statement that is printed in its entirety below.

When reached for comment about the allegations, Scott Stone, a spokesman for the Durant campaign said: “The panic from the career politicians must be at an all-time high for them to stoop to such a disgusting, misleading, and false personal attack. Nothing could be farther from the truth. Mike was not involved in this whatsoever and this has nothing to do with Mike’s campaign, just like Mike’s sister’s attorney said when this occurred.”

It was never alleged that Michael Durant abused his sister or had knowledge of the abuse until well after the fact. The stories at the time dealt with Durant’s public discrediting of an abuse victim, his own sister, after admitting in writing that his father had tearfully confessed to him that the allegations of years of molestation were true.

When contacted by AP in 1994 about the letters and the seeming glaring contradiction, Michael Durant declined to comment. When asked by AP if he felt his father had molested his sister, Michael Durant said that it was “up to the courts.”

In the same AP story, Mary Durant said that at some point between 1991 and 1994, Michael Durant had “totally changed.” In fact, during a phone call months earlier, Michael Durant screamed at his sister and called her delusional.

“He was completely out of control on the phone, screaming, yelling, calling me a lunatic,” Mary Durant told AP, “and he told me never to call back again and hung up on me. He’s just slipped into denial at this point, and it’s amazing that a person could have this much of a change of heart.”

The lawsuit filed by Mary against her father was eventually settled out of court. She told AP that she only filed the lawsuit because her father violated an earlier agreement to regularly attend therapy. She also stated in her lawsuit that the years of abuse caused her untold mental health issues, including multiple personality disorder, depression and post-traumatic stress disorder.

In a memoir published in 2003, Michael Durant never mentioned the allegations against his father, instead painting him as a hero and role model.

Statement from Mary Durant: “I have not had a relationship with my brother (Michael Durant) since the fall of 1993 prior to his being taken captive in Mogadishu. I have stayed away from my biological family for the majority of the last three decades for my personal safety. I never received any apologies from any of my family members, and I never will. In 2008 I gave them all my forgiveness for what they did. My forgiveness was taken completely for granted, not valued. My father died in 2010. For the safety and best interest of myself, my husband, and my son I choose to remain permanently estranged from my family, including my brother.”