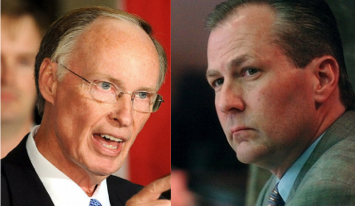 Yesterday, the final day of the 2014 regular legislative session, both Governor Robert Bentley and Alabama House Speaker Mike Hubbard addressed the recent arrest, conviction and resignation of Representative Greg Wren, R-Montgomery. And, it appears, that these two politicians have very different impressions of the situation.

In the closing hours of the session, Governor Bentley did a round of media interviews on the south lawn of the State Capitol, mainly concerning the fate of the Education Trust Fund budget in light of recent back and forth between the executive and the legislature on the lack of a 2% teacher pay raise in the budget.

During one of these interviews, Governor Bentley was asked about former Representative Wren’s actions, specifically whether or not the Governor thought it possible to “unintentionally” break State ethics laws.

Bentley’s response, short and sweet, was, “I would’ve known.”

Notably, Governor Bentley was a former longtime state legislator himself.

The question was based on the fact that Wren and his attorney maintain that the illegal transfer of confidential medicaid information to a private pharmaceutical company was unintentional, with the plea agreement even saying as much.

“It wasn’t an intentional violation,” Wren’s attorney, James Anderson, told members of the media in the Montgomery County Courthouse.

Anderson said that only later was it revealed that “some people that were associated with American Pharmaceutical or whatever…. had an interest in RxAlly, which Greg knew as a Virginia company.”

At one point, our editor Bill Britt asked Anderson if RxAlly was a member of APCI.

“No they were not,” Anderson responded.

In fact, not only were the two groups linked, they effectively merged in February of 2012, before Wren’s actions, with a press release regarding the partnership even being published by Alabama Media Group.

Even more damning is the fact that the month before the Wren acted, RxAlly had already been garnering national attention as an out of control, mismanaged company, with the Center for Medicaid and Medicare Services writing a report of several dozen pages chronicling the group’s “serious operational failures,” prohibiting them from advertising or signing up new medicare users.

The Alabama Political Reporter then asked whether Speaker Hubbard had requested language to be added to the 2013 budget to benefit APCI.

“That’s something he can’t talk specifically about,” Wren’s attorney responded.

Speaker Hubbard, though, today addressed the issue after the House of Representatives adjourned for the session, sine die.

Governor Bentley had also mentioned that Wren was a good man and a good friend, but on the next point the politicians views’ diverge quite noticeably.

“I’m absolutely certain what he did was not intentional,” Hubbard said.

“It’s unfortunate, but it doesn’t involve me, and I’m looking forward to moving on to the elections and coming back in next quadrennium and doing some really bold things for Alabama.”

So while Governor Bentley is saying “I would’ve known,” Speaker Hubbard is saying he is “absolutely certain” Wren’s actions were unintentional.

Our full breakdown of the actions of former Representative Wren, including a timeline of events, can be read here.

Video of Wren and his attorney at the Montgomery County Courthouse can be seen here.

Finally, video of Hubbard’s comments on Wren can be viewed here.

Advertisement. Scroll to continue reading.
In this article:Lee Hedgepeth, news, Stealing the Statehouse