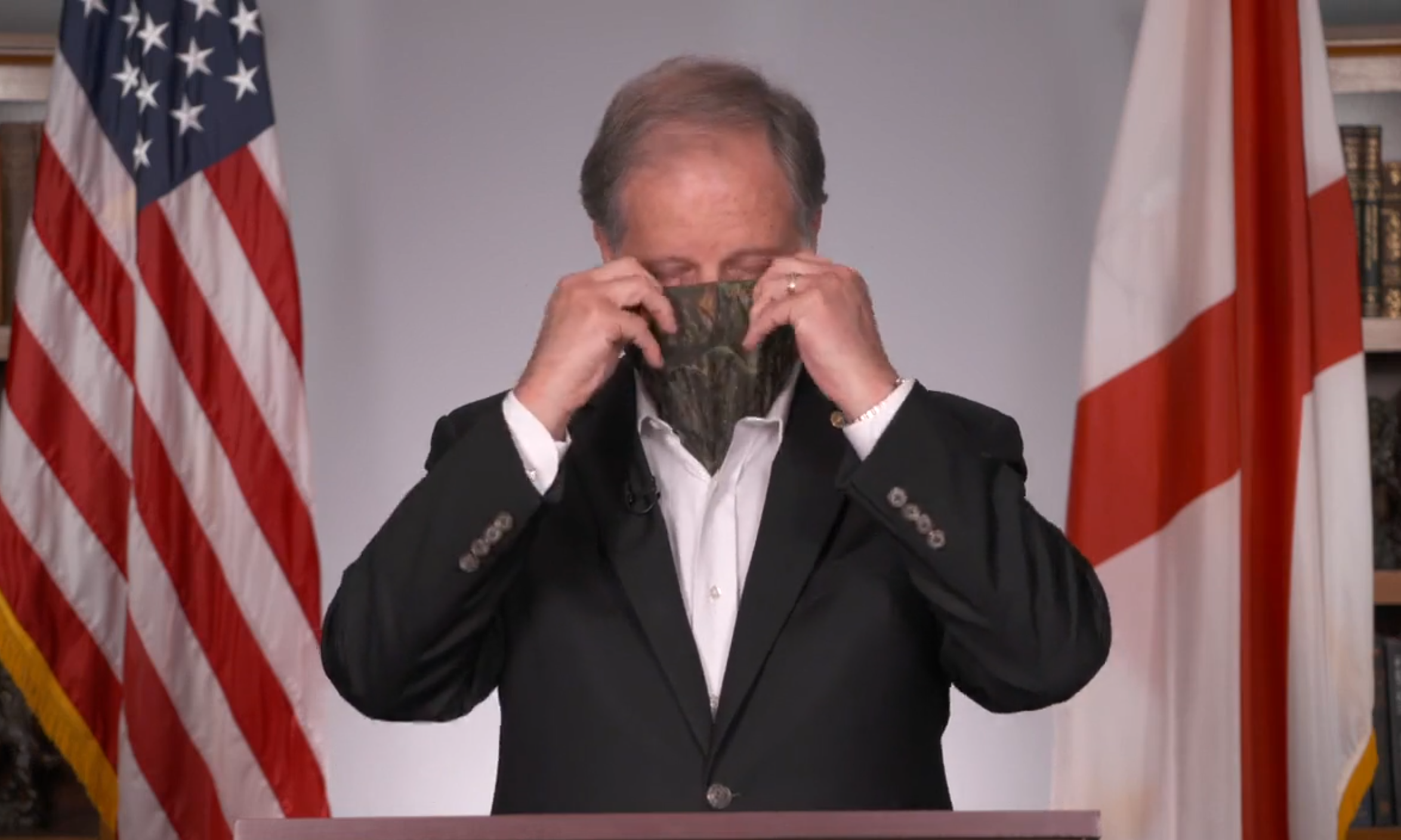 Sen. Doug Jones puts on a face covering during a livestreamed press conference in early May. (SEN. DOUG JONES OFFICE/FACEBOOK)

“Tommy Tuberville has said he doesn’t have a clue how to deal with the COVID-19 pandemic, and he is demonstrating that every day,” Jones said in a statement. “The same day our Governor issued her order to wear masks, he undermined her by saying he doesn’t support it. As I have been saying for weeks now, we need to stop playing politics or politicizing mask wearing. We need to do this for each other — for our seniors and for the most vulnerable. I want folks to listen to the medical professionals who actually have a clue how to respond to this crisis.

“Alabama hospitals are filling up, deaths are rising and parents and teachers are worried sick about kids returning to school safely. Following the Governor’s order is the most important thing all of us can do to get the virus under control. No mixed signals. I support the Governor’s order. Let’s come together and do this for each other,” Jones continued.

Tuberville, who on Tuesday became the Republican nominee for the Senate seat occupied by Jones, told an AL.com reporter on Wednesday that he didn’t agree with Ivey’s statewide mask mandate.

“I don’t like the government telling us what we have to do. Surely to goodness, we can protect our own selves without the government dictating every move that we make. So, no, I’m not for mandatory,” Tuberville told AL.com. “But I am for wearing masks. I believe that right now, in the time that we’re in, if you’re around other people, probably it’s good that you wear them. But I’m not for government — I think our government’s gone overboard on this entire pandemic because we don’t know the facts. Every time you turn around you hear different doctors say different things. I just want them to let us determine our own fate.”

Infectious diseases doctors and public health officials say that masks are one of the best ways to prevent transmission of the virus, particularly if the person wearing the mask is infected and does not know it. While much is not known about the virus — for example, how long immunity lasts after one recovers from an infection — numerous scientific studies and ample evidence shows that the novel coronavirus is spread through small respiratory droplets, and masks are effective at blocking those respiratory droplets from spreading from the mouth and nose of the person wearing the mask.

A study published in Health Affairs, for example, compared the virus’s growth rate before and after mask mandates in 15 states and Washington D.C. That study found that mask mandates led to a slowdown in daily COVID-19 growth rate, which only became more apparent over time. The first five days after a mandate, the daily growth rate slowed by 0.9 percentage-points compared to the five days prior to the mandate. At three weeks, the daily growth rate had slowed by 2 percentage-points, according to the University of California San Francisco.

Another study looked at coronavirus deaths across 198 countries and found that those with cultural norms or government policies favoring mask-wearing had lower death rates.

Tuberville told AL.com that he believed wearing a mask is a personal choice. The article noted that at Tuberville’s victory party Tuesday evening, Tuberville, who had worn a mask earlier in the day, came in not wearing one to give his speech, as many supporters gathered near the stage, many also not wearing masks.

Ivey, speaking Wednesday during the announcement of her statewide mask order, said despite the best efforts, the state is seeing increased cases every day “and we are almost to the point where hospital ICUs are overwhelmed.”

“We really don’t have a lot of other options at this time,” said State Health Officer Dr. Scott Harris, speaking at Ivey’s press conference Wednesday. “We’re frequently asked, does the economy need to be shut down, and the answer is no. Not if people will cooperate with the orders that we have in place.”

Jones for many weeks has hosted weekly press conferences broadcast on his Facebook page with state and national medical experts, allowing journalists and the public to ask questions about coronavirus. Last week, Jones hosted Dr. Anthony Fauci, head of the National Institute of Allergy and Infectious Diseases and a member of the White House’s coronavirus task force, who called on governors to issue face mask orders to slow the spread of the virus.

“I do believe a statewide mask order is important because there is a variability in people taking seriously or even understanding the benefit of masks,” Fauci said. “Masks make a difference. It is one of the primary fundamental tools we have.”