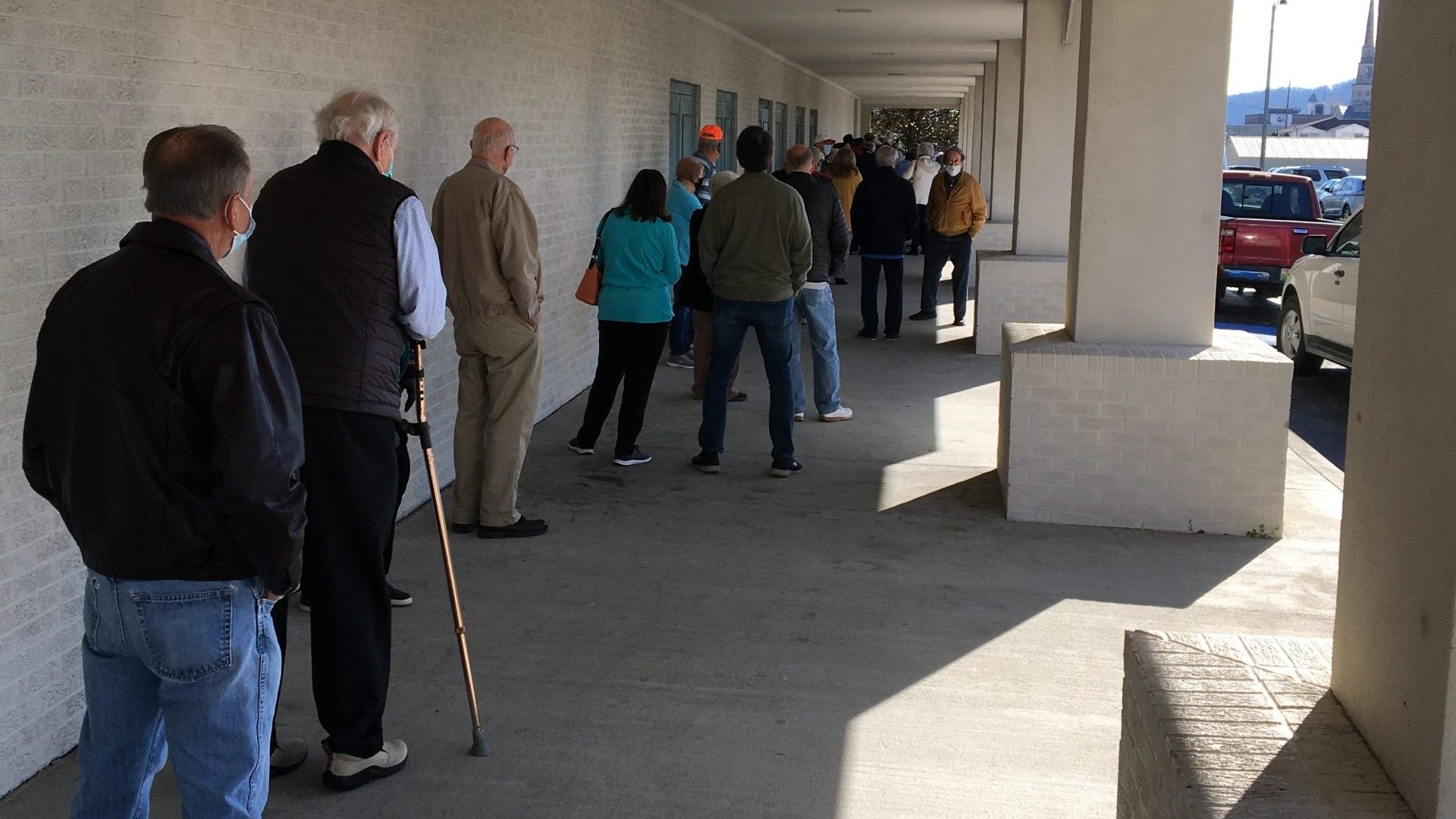 The line at the Anniston City Meeting Center wrapped nearly around the building on Tuesday as people waited to get vaccinated. (EDDIE BURKHALTER/APR)

For Erin Johnson, the COVID-19 vaccines can’t be dispersed soon enough, but not for her husband or two sons, who are still suffering from coronavirus. She’s worried for her elderly father.

“He’s 82, and I know that he’s wanting to get [the vaccine],” Johnson, who lives just outside Huntsville, told APR by phone Tuesday. “I want him to get it, just because he hasn’t quite taken it as seriously as I would have liked to have seen him, but he’s been very, very fortunate to not get it.”

The pace of the vaccine rollout has troubled her, she said. Nationwide and in Alabama, the number of vaccines being delivered and administered hasn’t met expectations, although state public health officials have noted vaccinations are increasing as county health departments recently began administering them, and should continue to increase as other entities begin doing so, as well.

“It has been frustrating. We kept saying, it’s like you’ve made it so far. It’s been discouraging to see,” Johnson said of the rollout.

As of Jan. 2, there were only enough doses of the Pfizer and Moderna vaccines to give the first shot of vaccine to four percent of Alabama’s population. Of those doses, just under 19 percent, or 42,810 had been administered. During the week ending Jan. 2, the state vaccinated on average 3,190 people each day.

Landers said last week that county health departments didn’t begin administering vaccines until Dec. 28 and that pharmacies statewide would begin doing so this week or next.

“We started out with a smaller number of entities. Each week we’ve increased the number of entities vaccinating, so I believe we’re moving in the right direction, and this should increase exponentially over our full week this week and next week,” Landers said Monday.

“We also expect that some entities that may have an occupational medicine department, which will be vaccinating within their entity as what’s called a closed point of distribution,” Landers said, referring to some workplaces that will be administering vaccines.

Earlier in December, ADPH learned the state’s second shipment of the Pfizer vaccine would be reduced by 35 percent of the expected 49,000 doses, with no clear explanation from the federal government as to why that was, State Health Officer Dr. Scott Harris told APR at the time.

Landers told APR on Monday that vaccinating the number of people who need to be vaccinated is an “all hands on deck in Alabama.”

Hospitals have been vaccinating both their own staff and those of other neighboring hospitals and other health care workers deemed at-risk, according to ADPH’s vaccination plan.

The Calhoun County Emergency Management Agency on Tuesday announced it had moved on from ADPH’s phase 1a to phase 1b, which includes vaccinating those who are 75 years and older.

The county EMA in a statement said it was doing so because it had met ADPH’s requirements for vaccinating those in phase 1a, which include at-risk medical workers and nursing home residents and staff.

Calhoun County began offering vaccines to those aged 75 and older on a first-come, first-serve basis on Tuesday at the Anniston City Meeting Center. The center’s parking lot was full Tuesday afternoon and the line of people waiting wrapped nearly around the building.

ADPH spokesman Ryan Easterling told APR in a message Tuesday that while at a state-level Alabama remained in phase 1a, some counties can decide to move on to phase 1b based on “uptake and saturation.”

“This decision is made at the local level, as the county health departments work with the local points of distribution within the county (hospitals, pharmacy, etc.) to assess what their reach has been,” Easterling said.

Counties that have adequately covered the 1a population from “very high to medium” can begin vaccinating people in the 1b phase, Easterling said.

Landers said ADPH does expect “some level of scheduling” vaccinations, however, as counties move through the different phases to reach more people.

“And that will really be not only for the convenience of patients but also being aware that, at least with these vaccines,  you have to plan when you’re going to open a vial of this vaccine,” Landers said.

Once a vial is prepared there are time limits for when those doses must be administered or the vaccines won’t be effective and must be tossed out, Landers explained, so by scheduling people for vaccinations public health officials can better ensure doses won’t be wasted.

“We’ve made a commitment in Alabama to use every dose of vaccine,” Landers said.

The Johnsons, who own their own business, worked hard to do everything right, she said. Early on they allowed their employees to work from home, but they have an 18-year-old son, whom they believe may have brought the disease home.

Symptoms began last Monday, and while they’ve been on the milder side for her and her husband, she still described it as “the worst thing that we’ve ever had.”

Their 18-year old and 22-year-old son, who came home from college, have been hit much harder by COVID, she said.

“I really didn’t expect for it to affect them so much,” Johnson said.

Johnson said she’s aware that many people have been waiting in line to get vaccinated, in places such as Florida.

Seniors aged 65 and older in Florida’s Lee County camped out in lawn chairs overnight to get vaccinated, after the Lee County Department of Health encouraged them and at-risk medical workers to come on a first-come, first-serve basis to one of seven sites, each with just 300 doses, CNN reported last week. Some waited up to nine hours to get vaccinated, according to CNN.

“I just can’t believe this day and age we can’t have it better,” Johnson said.

Alabama on Monday hit record-high COVID-19 hospitalizations and for the first time had more than 3,000. On Tuesday, the state saw its largest single day increase in cases so far, but ADPH noted some of those cases were the result of labs turning in results completed over the holidays.

The state’s seven-day average positivity rate was nearly 50 percent on Tuesday. Public health experts say it should be at or below five percent or cases are going undetected.