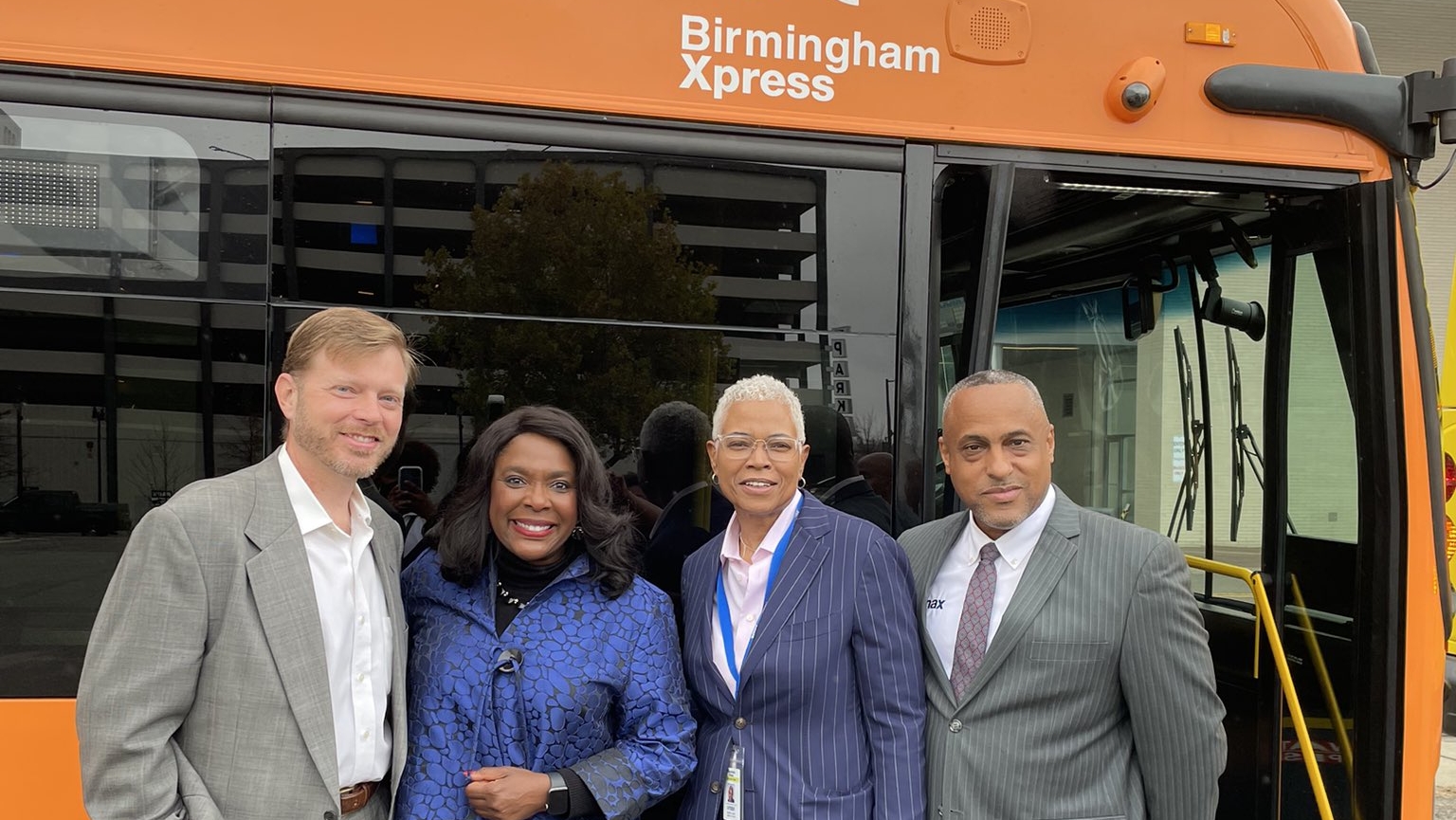 Congresswoman Terri Sewell in Birmingham on a tour touting the benefits of the recently passed Infrastructure and Jobs Act.

Congresswoman Terri Sewell, D-Alabama, kicked off her “Building a Better Alabama” district tour in Birmingham Friday by discussing the federal funds her district and the state at large will receive from the recently passed Infrastructure Investment and Jobs Act.

The Infrastructure Investment and Jobs Act was passed with bipartisan support in Washington this November, providing an immense $1.2 trillion injection of federal funds for infrastructure, public transportation, broadband, and other public works projects nationwide. Alabama will receive $5.8 billion alone for highways and bridges, with hundreds of millions more for public transit, repair and maintenance of existing infrastructure, railroads, airports, broadband, and more.

“It is a once and a generation opportunity to build back better our infrastructure,” Sewell said in her address Friday. “That’s our roads, our bridges, our water infrastructure, our railroads, our public transportation. It is truly transformational.”

Sewell was the lone member of the Alabama delegation to vote in favor of the Infrastructure Investment and Jobs Act. Shortly after the bill received the president’s signature, Rep. Gary Palmer, R-Alabama, took advantage of the bill’s passage to mention the act includes funding for the long-planned Northern Beltine outside of Birmingham, though Palmer had voted against the act in the House and previously described it as “recklessly expensive,” a fact that drew harsh criticism.

During her address, Sewell mentioned that portions of the bill relating to broadband were drawn up by her and House Majority Whip Jim Clyburn, D-South Carolina.

“If we’ve realized anything in this pandemic, it is that we need better, faster, quicker internet opportunities for every Alabamian irrespective of where they live,” Sewell said, highlighting that “30 percent of the households in the black belt of Alabama” cannot connect to broadband internet.

According to Sewell, $100 million in federal dollars will be allocated to Alabama for broadband connectivity over the next five years.

“I will make sure that as the lone Alabamian to vote in favor of this $1 trillion infrastructure bill that our district, Alabama’s seventh congressional district, will get its top priorities,” Sewell said.

Earlier this November, Sewell penned a letter to the Federal Railroad Administration and U.S. Transportation Secretary Pete Buttigieg, urging both to help find a solution to railroad blockages that continue to plague the 7th Congressional District, including a Norfolk Southern train that blocked intersections in Westside Birmingham for six days this winter.

Sewell said several previsions inside the Infrastructure Investment and Jobs Act would help elevate railroad blockages in the district.

Also in her address, Sewell stressed the importance of passing the Build Back Better Act, a second $2.2 trillion social and climate investment bill currently delayed in the Senate after a potential defection from Sen. Joe Manchin, D-West Virginia.

“President Biden said that he wanted to make sure that he was going to build back better and he said that that included physical infrastructure, but it also includes social infrastructure, which is why it’s so important that we get the Build Back Better bill, that passed the House of Representatives and now sits on the Senate side, that we get that signed into law,” Sewell said, adding that the bill would include paid family medical leave, funds for childcare, create thousands of jobs and fight climate change.

“At the end of the day, we do have to reduce our carbon footprint,” Sewell said. “It’s important, not only for us here in Birmingham and Jefferson County but all across the world.”

At the end of her remarks, Sewell implored senators in Washington to pass the John Lewis Voting Rights Advancement Act, a sweeping voting rights bill sponsored by Sewell that failed to reach 60 votes in the Senate to bring the measure forward for debate. The bill has been introduced by Sewell four times over the eight years since the landmark Supreme Court decision, Shelby County v. Holder.

“The Alabama seventh congressional district knows very well the sacrifices that have gone into having civil rights and voting rights in this country,” Sewell said. “And those rights are at peril as state legislatures across this nation are imposing stronger voter suppression laws, making it harder for certain people to vote. It’s unacceptable.”

Later the same day, Sewell continued her district tour with a visit to Tuscaloosa. The city recently received a $17 million RAISE grant from the U.S. Department of Transportation, meant to fund transportation infrastructure projects in the city, including the University Boulevard Corridor project.

Will Sellers1 hour ago