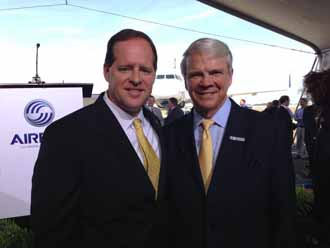 “When Airbus made the decision to establish our U.S. Assembly Line in Alabama, the cooperative atmosphere and pro-business climate in the state were very attractive to us,” said Airbus Americas Chairman T. Allan McArtor.  “The Alabama Commercial Aviation Business Improvement Act will be seen by other companies as further reason to consider locating here too.  That’s bound to create a fertile environment for jobs creation, and credit is due to a number of people including Governor Bentley, Senator Cam Ward, Senator Vivian Figures and Rep. Bill Poole for advocating forward-thinking, pro-growth policies.”

“Governor Bentley and Commerce Secretary Canfield have made job creation their number one priority, and I am glad to do my small part to help in their vision,” Ward said of the legislation sponsored by he and Rep. Bill Poole. “This will do so much to even the playing field with neighboring states to help attract Tier 1 and Tier 2 suppliers to Alabama. It is common sense business legislation like this that I have focused on during my time as Senate Judiciary Chairman.”

“The Alabama Commercial Aviation Business Improvement Act gives the Tier 1 and Tier 2 Airbus suppliers a better reason to locate in our state – thus providing more of our citizens the opportunity to show that Alabama is second to none in smart hardworking citizens seeking a better life for their families” Ward said.

With Airbus in Mobile, Hyundai in Montgomery, Mercedes in Vance and the defense industries in Huntsville and The Wiregrass, Alabama has built itself into a leader in the sophisticated manufacturing sector of the 21st Century.