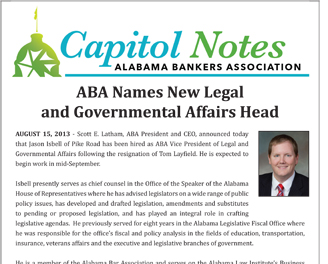 MONTGOMERY–A newsletter went out Thursday announcing that Jason Isbell will be leaving the office of the Speaker of the House sometime mid-September.

The newsletter, sent by the Alabama Bankers Association, announced that Isbell will be joining ABA as the Vice President of Legislative and Governmental Affairs.

Isbell currently serves as chief council to Speaker of the House Mike Hubbard (R-Auburn) making a cushy $78,000 per year.

According to the newsletter, Isbell “advised legislators on a wide range of public policy issues, has developed and drafted legislation, amendments and substitutions to proposed legislation and has played an integral role in crafting legislative agendas.”

Isbell’s resignation is following rumors that Hubbard’s Chief of Staff Josh Blades has one foot out the door on his way to go work for BCA. One source close to the office suggested that “Hubbard won’t let him leave” because of the ongoing grand jury investigations.

In addition to his staff, several of Hubbard’s right hand men in the legislature have resigned.

Representative Jay Love (R-Montgomery) resigned August 1 to take a private-sector job as an education lobbyist. Love was the chair of the House Ways and Means Education Committee.

Representative Jim Barton (R-Mobile) denied rumors that he was resigning to lobby for Kinney Capitol Group, but those rumors turned out to be true. He was the chair of the House Ways and Means General Fund Committee.

Amid grand jury investigations from Hubbard’s dealings with Craftmasters or other potential scandal that has yet to be uncovered, it is unclear if those close to the situation are heading for high ground. The one thing that is clear in this situation is that something is rotten in the State of Alabama.