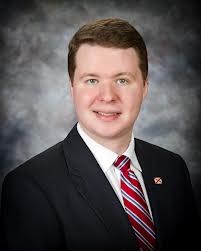 Adam Thompson’s campaign for state auditor got some unexpected good news Tuesday when Alabama Secretary of State Beth Chapman announced her support for Thompson on Facebook. Most insiders were expecting a formal announcement from the current Secretary of State and former state auditor, but the news comes at a critical time in the fund raising process.

Beth Chapman said on Facebook, “If you liked my work in the State Auditor’s Office, you’re gonna LOVE Adam’s work there. Visit his website and FB page and let him know he has your support!!!”

Thompson has been a longtime staffer for Secretary Chapman, both at the Secretary of State’s office where he was Chapman’s chief of staff and at the Auditor’s office.

Cleburne County Attorney Ray Bryan (R) is also running for the office of state auditor; but on the unique platform of abolishing the office of State Auditor. The longtime Republican Party insider claims that new technology has eliminated the need for the position of State Auditor and if elected Bryan vows to support a constitutional amendment to abolish his office.

Thompson who has working in the office believes it is essential. He replied to Bryan’s call for ending the position in a written statement, “How can you have more accountability when you eliminate the only independent watchdog the citizens of Alabama have in their government? Giving the State Auditor’s duties to the Legislature is like letting the fox guard the hen house; it just doesn’t make sense!”