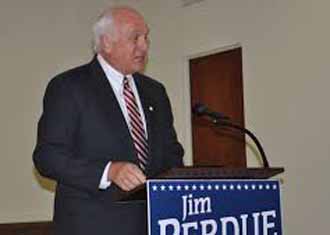 On Tuesday, Crenshaw County Probate Judge Jim Perdue (R) announced in a written statement that he is running as a Republican to be Alabama’s next Secretary of State.

Judge Perdue said in a written statement, “I am delighted about the opportunity to travel throughout Alabama over the coming months and share my vision with the people of this great state.” “I feel that my service as a probate judge for over a decade uniquely qualifies me to serve as Secretary of State.”

Perdue joins State Representative John Merrill (R) from Tuscaloosa in the race for Alabama Secretary of State. Incumbent Secretary of State Beth Chapman (R) is prevented from running again by term limits. The Primary election is scheduled for June 3, 2014.

Since the demise of the Whig Party, the Alabama Democratic Party dominated politics in rural Alabama. Alabama Democrats controlled the Court Houses and the Sheriffs’ offices even when those counties were voting for Goldwater, Nixon, Reagan, and two Bushes. That legacy appears to be crumbling into the dust of history. Alabama Republicans took both houses of the Alabama State Legislature for the first time since the 1870s and rural majority White rural counties joined with their long Republican voting suburban brethren in rejecting Alabama Democrats in 2010.

No Democrat has won a state wide race in the state of Alabama since 2008.

Alabama Republican Party Chairman Bill Armistead said in a written statement, “It is hard for elected officials with a conservative philosophy to remain in the Democrat Party.”

Perdue has been the Probate Judge since since Jan of 2002. Perdue has also been chairman of the Industrial Development Board. Prior to that Perdue worked for seven years with the Federal Reserve Banks in Atlanta, Miami, and Birmingham. He returned to Luverne in 1980 to buy the family business, Perdue-Folmar Company, which built aluminum buildings, awnings, carports and convenience store canopies in Alabama and other states. Perdue has been the President of the Crenshaw County Chamber of Commerce, the vice-chairman of the State Private Industry Council, the chairman of the Alabama Probate Judges Association Legislative Committee, and is an active member of the Luverne Rotary Club, the South Central Alabama Development Commission, and the President of the Crenshaw County Historical Society.