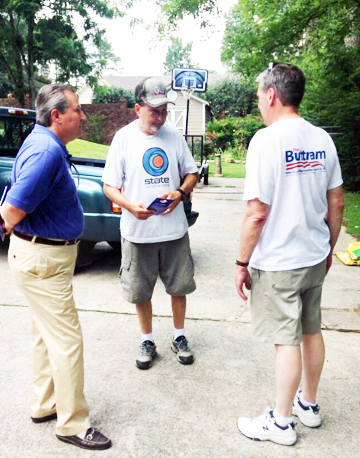 Not only did Hubbard take to the streets for the beleaguered Buttram, but former Gov. Bob Riley and a who’s who of the Hubbard faithful were also on hand (Some have suggested that members of the Speaker’s staff my have coordinated this large legislative contingency on hand for Buttram).

Harbison is a police officer and a small business owner who said in a local interview, “I am not there to represent myself or just a select few. I do my best to make decisions that will benefit the majority…”

Buttram, however, has fallen into a lock-step with Hubbard, Riley and the BCA since taking office. This allegiance with the Montgomery power elite has come at a great cost to his home district. Where as Buttram has become a loyal lieutenant for Hubbard—who is under investigation by the “Republican” Attorney General’s Office. Harbison says that if he is elected he will seek to restore honesty to State government regardless of party.

Hubbard, along with a host of Hubbardites descended of Cullman County in a desperate gamble to stop further wins by insurgent Republicans candidates.

Buttram was swept into office in 2010, along with others who would become faithful followers of the Hubbard/Riley/BCA machine. Buttram has been a solid vote on expanding alcohol sales, privatizing education and other bills promoted by BCA.