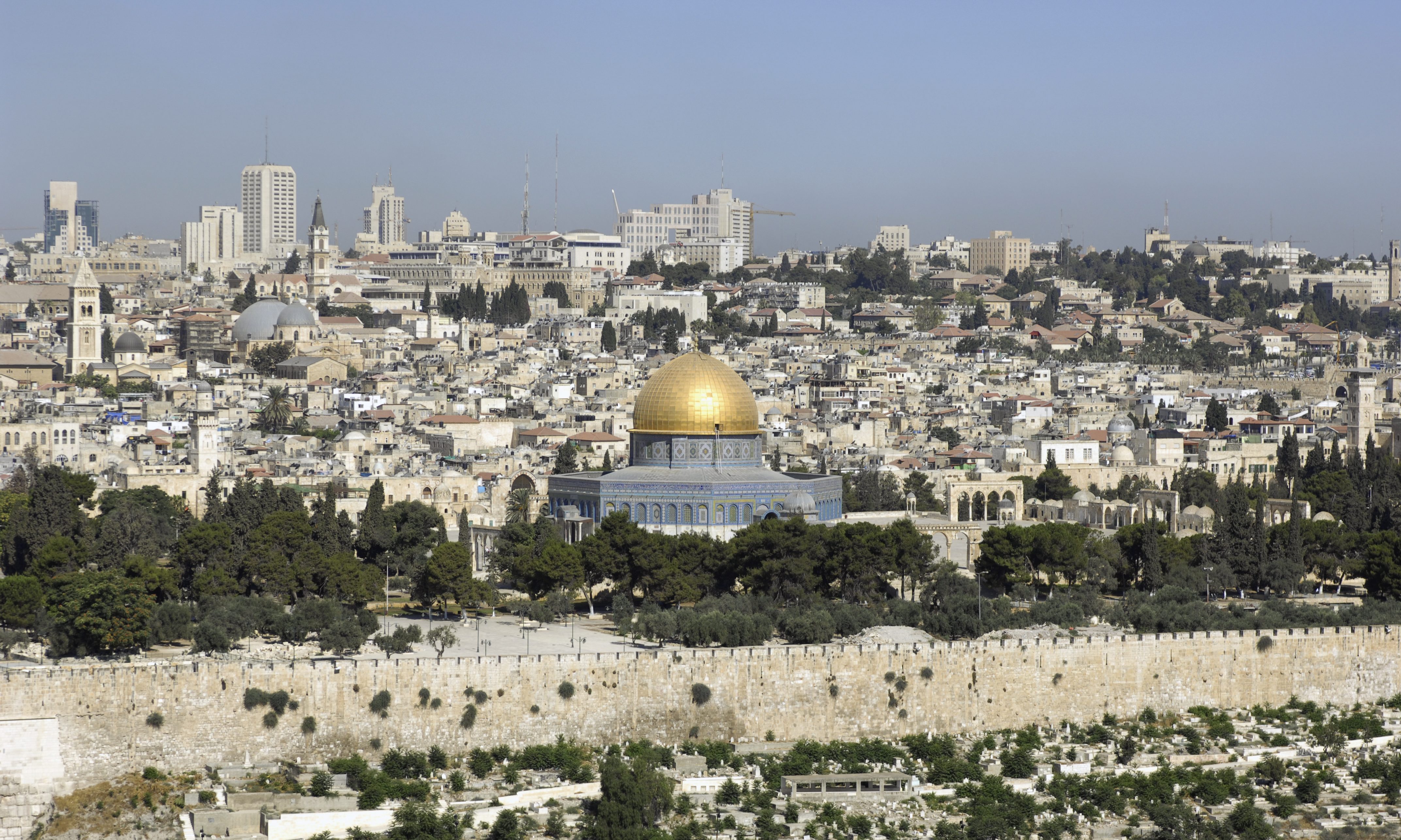 Monday, President Donald Trump has formally recognized Jerusalem as the capital of Israel by opening the new embassy there.

Congressman Gary Palmer, R-Hoover, said, “This opening makes the U.S. the first nation to recognize Jerusalem as the capital of Israel.”

Both Israel and the Palestinian Authority claim Jerusalem as their capital.

In the Bible’s book of Joshua, the Gibeonite King of Jerusalem Adoni-Tzede made a separate peace with Joshua and the invading Hebrews. The other Canaanites decided to attack the city before its strategic position fell to Joshua and the Israelis. Joshua miraculously marched his whole force to intercept and defeat those Canaanite kings before they could take the city.

Centuries later a young King David took possession of the city, then controlled by the Jebusites, who called it Jebus, and made it his capital in 1010 B.C. renaming it Jerusalem. His son, King Solomon, would build the First Temple there and make the city the center of the orthodox Hebrew religion.

On March 16, 597 B.C. King Nebuchadnezzar of Babylon took the City. King Jehoiakim died during the siege. His 8-year-old son, King Jeconiah and most of the royal family were taken into exile in Babylon. His 21-year-old uncle, Zedekiah was installed as a puppet king by the Babylonians. In 586 B.C. the Babylonians again took the rebellious city after a two year siege. This time they destroyed it and the Temple of Solomon.

In 444 B.C. Nehemiah was appointed as the Governor of Judea by the Persian Empire. He repaired the city walls, repopulated the city and built a much smaller second temple. In 332 B.C. the city of Jerusalem fell to Alexander of Macedonia following the siege of Tyre.

In 168 B.C. the deposed High Priest Jason (Jesus) took the city after wrongly receiving the information that Seleucid King Antiochus IV Epiphanes had died on campaign in Egypt. Antiochus retook Jerusalem and responded with a massive persecution of orthodox Jews to speed the Hellenization process. This sparked a Jewish revolt in 167 B.C. under the Maccabees family (Hasmoneans) that eventually took control of the city, the temple, and eventually most of classic Israel including the Edomites who were forced to convert to Judaism.

In 67 B.C. the Roman Republic invaded to settle a Hasmonean civil war and partitioned the country. Julius Caesar and Marc Antony favored the Edomite Antipater and his son Herod. In 40 B.C. the Parthian Empire took Syria and the Hasmoneans took back Judea as a Parthian allied state. Herod fled to Rome who declared him the rightful King of Judea. With Roman help, Herod retook Jerusalem and the country in 37 BC. Herod launched a number of building projects including a massive rebuilding of the Second Temple as a much grander structure. After Herod’s death in 4 B.C. the country was divided among his four sons but the Roman Empire began to exercise much more direct control. In approximately 34 A.D. Jesus of Nazareth was executed by the Romans in Jerusalem at the urging of Jewish leaders.

In 66 A.D. the Roman Governor Gessius Florus plundered the temple and seized a number of Jewish leaders. The country rose in a massive revolt. In 70 A.D. the Roman General Titus took the city after a brutal seven month siege and took it and the temple. The surviving Pharisees then reorganized modern Judaism without the involvement of their rivals, the Sadducees, and the Essenes.

In 115 to 117 A.D. there was a second Jewish revolt. In 130 A.D. the Roman Emperor Hadrian visited the ruins and orders Jerusalem rebuilt, this time dedicated to the God Jupiter and renamed Aelia Capitolonia. In 132 A.D. Simon Bar Kokhba takes the city by force, expels the Romans, renames the city, and is declared the Messiah. In 136 A.D. the Romans retook Jerusalem and expelled all Jews and Christians, a temple to Jupiter is built on the Temple Mount and a temple to Venus is built on Calgary and the city was rededicated as Aelia Capitolonia.

Christians begin returning after Hadrian’s death. In 313 the Emperor Constantine legalizes Christianity. In 324 Constantine calls the Council of Nicaea and renames the City as Jerusalem. In 361 Julian the Apostate becomes Emperor and attempts to reverse the growing Christianization of the Empire. As part of that multicultural effort Julian allows Jews to return to the City and orders the Temple rebuilt. Work on the Temple ends with Julian’s death and a massive earthquake in 363. In 380 the Roman Empire is divided into East and West, Jerusalem is part of the Eastern or Byzantine Empire.

In 637 Caliph Umar the Great takes the city as Muslim armies emerge out of Arabia in force. In 750 the Umayads are defeated by the Abassids who take Jerusalem and assassinate the governor. In 878 Ahmd Ibn Tulun, the ruler of Egypt, takes Jerusalem. In 904 the Abassids retake the city. In 969 the Umali Shia Fatimids took Jerusalem.

In 975 the Byzantine Emperor John I Tzimiskes took Syria and much of the holy land, including Nazareth, but was defeated just outside of Jerusalem. In 1054 the Patriarch of Jerusalem joins with the Eastern Orthodox Church against the Pope in the Great Schism.

In 1073 the Seljuk Turks take Jerusalem from the Fatimids. In 1077 the city revolts against Seljuk rule. Emir Atsiv Ibd Ubaq then returns and retakes the city slaughtering many of the inhabitants. Amidst a Seljuk civil war the Fatimids retook Jerusalem in 1098. In 1099 the First Crusaders arrive and besiege Jerusalem. Many of the Muslim and Jewish inhabitants of the city are killed. Baldwin I is named the first King of Jerusalem.

In 1187 the Christian army was defeated by Saladin at the Battle of the Horns of Hattin. Saladin then besieges and takes Jerusalem. In 1192 the Third Crusade, led by English King Richard the Lionheart, fails to retake Jerusalem. In 1219 the Emir of Damascus destroyed the walls of Jerusalem to prevent the Crusaders from taking the City as a fortified town. From 1229 to 1244 the Christians controlled Jerusalem by treaty. In 1244 the city fell to Muslim control again after a siege. In 1250 the Seventh Crusade ends in failure with the Christians unsuccessful in their attempt to retake Jerusalem.

In 1260 Jerusalem was raided by the Mongols; but were ultimately defeated by the Egyptian Mamluks just to the north of the city. In 1267 Jerusalem only had two Jewish families still living there. In 1291 the Mamluks took the last independent Crusader state, Acre. In 1300 a joint Mongol and Armenian army took Jerusalem but withdrew after just a few months. In 1347 much of the population was killed by the Black Death.

In 1516 the Mamelukes were defeated by the Ottoman Turks who took all of Palestine. In 1771 to 1772 the Christian Mamluk rule of Egypt took Jerusalem with Russian help. He ultimately withdrew. In 1799 the French leader, Napoleon Bonaparte, was forced to end his effort to take Jerusalem after his defeat at the Seige of Acre.

In 1831 Wali Muhammed Ali of Egypt conquered the city. In 1834 the city revolted against Ali. In 1839 and 1840 Jewish Rabi Judah Alklai published books urging Jews to return to Palestine. In 1840 the Ottoman Turks retook Jerusalem with British help. Beginning in the 1860s, Jews from Holland and Germany began resettling in Jerusalem and Jewish neighborhoods began expanding.

In 1897 the First Zionist Congress discussed Jerusalem as a possible capital of a future Jewish state. In 1901 Ottoman authorities placed restrictions on Jewish immigration to Palestine. In 1914 World War I begins. The Ottoman Empire sides with Germany and Austria against France, Russia, Italy, Great Britain, and eventually the United States.

In 1917 British forces under Allenby defeated the Ottomans at the Battle of Jerusalem and entered the city. The Ottomans lost control of Palestine to Great Britain in the Treaty that ended World War I. The Holocaust decimated Jewish populations in Europe during World War II. Israeli nationalists and Arab nationalists increasingly were at odds over the future of Palestine.

On November 29, 1947 the United Nations partition plan called for making Jerusalem an international city separate from any state.  In 1948 the City was divided between Israel and the Kingdom of Jordan. On June 7, 1967 the Israeli Army took the old city of Jerusalem from the Jordanians. Israel eventually moved its capital from Tel Aviv to Jerusalem.

The United States now recognizes Jerusalem as the capitol of Israel. Israel is either a nation that is 75 years old or promised by God to Abraham’s descendants in the Book of Genesis well over 4000 years ago, depending on which point of view you want to adopt.