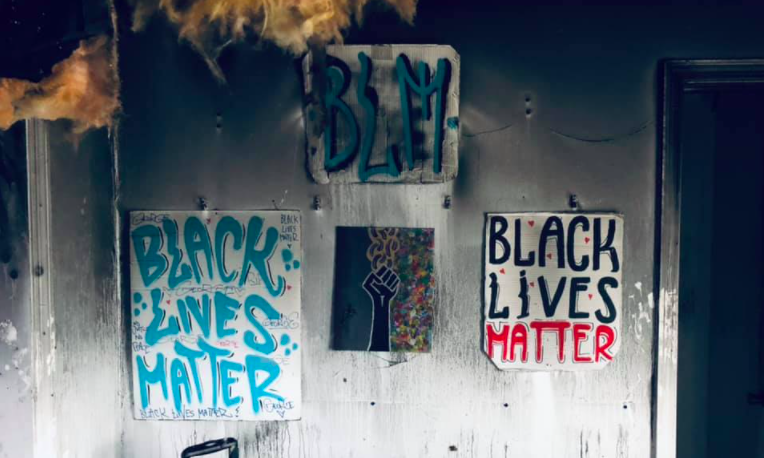 Jerome Gunn said he’s not sure what’s next after someone broke into his Gadsden business and set it ablaze Wednesday evening, but he said he thinks he knows why it was done.

The Detroit native who lives in Birmingham said his auto detailing and salon business was also a meeting place for the local Black Lives Matter group. Gunn said he believes whoever burned his business is angry over his involvement in the movement.

The Gadsden Times first reported the incident, reporting that the Gadsden Fire Marshal said the fire was definitely arson and was being investigated by the fire and police departments.

Gunn also fed the homeless from his business each Sunday, many of whom are white, he said. The food and water he’d stored in his business was ruined in the fire, he said. When the tornadoes hit in Jacksonville in 2018 he paid for hotels for people who’d lost their homes, he said, and he did the same when a Gadsden apartment complex burned in October.

“With that being gone it’s really going to hurt me tremendously,” Gunn said of his business and charity work. “I told my wife she’s going to need to be strong and stand by me. I’m at my lowest point.”

Gunn said for months he’s received hateful letters at his business and home. He read a recent letter he received, which was filled with expletives and racially derogatory language. “Why did you come to Gadsden to start trouble? Oh yeah. Because in Detroit you’re just another n****r,” the letter reads.

“They’ve been mad since we started Black Lives Matter Gadsden, and then with the marches and protests, all that stuff, they hate it,” Gunn said.

A Black Lives Matter Gadsden march in June that started at Gunn’s business ended peacefully, but counter-protesters surrounded a Confederate Monument honoring Emma Sansom near city hall, sparking tension that resulted in two of the counter-protestors being briefly detained.

Police in riot gear kept the two groups separated. Some of the white counter-protestors came carrying improvised weapons and wearing protective gear. None of the Black Lives Matter protestors, many of whom were white, carried such gear, according to APR’s coverage of the march.

There was another, smaller march on Tuesday, back to the Emma Sansom monument, Gunn said. He’s unsure if that latest march drove someone to burn his business, but said he’s certain it was a hate crime.

Gunn said he has insurance on the building but was told because it will take time for the investigation to be completed, and for the samples from the scene analyzed at a lab, it may be seven months before the insurance company can help.

Gunn said he knows there are some out there who hate his involvement with the Black Lives Matter movement, but that there is also plenty of “love out there,” too. He sees that love in the people who come out to march along with the group, people of all colors and all ages.

He’s not sure what he’ll do about his business but said he won’t stop working with the Black Lives Matter movement or helping those in need. A friend of Gunn’s set up a GoFundMe account for those wishing to donate to Gunn, which can be found here.