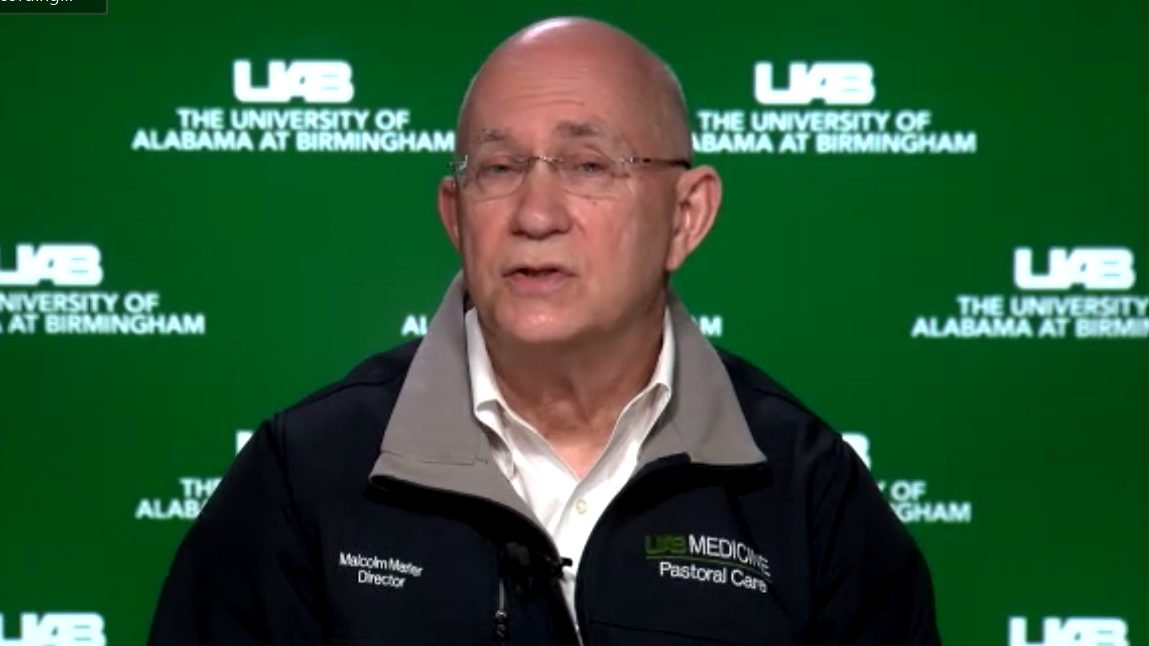 In the last month, Malcolm Marler and his team of chaplains have been able to resume in-person visits with hospitalized COVID-19-positive patients because his staff is receiving adequate personal protective equipment. The difference it makes is profound, he said.

“We are really working at trying to figure out how can we connect and be with people to help them know they’re loved and not alone, more than anything else,” said Marler, senior director of pastoral care at UAB Hospital.

With the hospital trying to preserve as much PPE as possible for nurses and doctors, caring for patients’ emotional needs had largely fallen to overworked medical staff.

“A nurse was telling me this morning, ‘I’ve been their nurse but I’ve also been their chaplain, and I’ve been their family member who heard stories from them,’ and so forth,” Marler said.

His team continues to minister to non-COVID patients. Those who have tested positive represent 10-15 percent of the patients the chaplains see.

Alabama added 4,406 cases on Thursday, and averaged 3,204 cases each day this week, a 66 percent increase from the highest seven-day average during the peak of the state’s summer surge. The state’s average percent positivity over the last week is 45 percent. Public health experts say it should be at or below 5 percent or cases are going undetected.

Hospitals statewide were caring for 2,815 COVID-19 patients, which is the highest daily count since the start of the pandemic, tied with the hospitalization number on Tuesday. On Thursday, the Alabama Department of Public Health reported 53 new COVID-19 deaths, bringing the total to 4,827.

While chaplains’ presence is a welcome relief for medical workers — many of whom are stressed and in need of their own emotional and spiritual support — it is mainly a powerful opportunity to lift the sense of isolation and despair that patients face while cut off from loved ones.

Marler and his team have poignant conversations every day, he said, but one in particular chokes him up as he describes it. A woman called to tell him that her elderly mother had dementia and had tested positive. She asked if he’d visit her mother, though she may not understand what he’d say.

Marler visited the mother, but in her room he had a hard time connecting with her, standing 6 feet away and covered in PPE, speaking through a mask and face shield. The woman seemed unable to think or speak clearly, he said.

“It was quiet, and I said, ‘Would it be ok with you if I had a prayer?’” he said. “And I’m telling you, her focus of her eyes looked at me and said, ‘Yes! Thank you.’ It was amazing. It was just one of those moments where you go wow, this is special.”

He said his prayer and when he was done, the woman looked him in the eyes and said, “Thank you very much,” he said. Marler called and told the daughter what had happened.

“Oh, I can’t tell you how much that means,” she replied.

“Connecting with someone’s heart is a great, great gift to be able to do this kind of work,” Marler said.

Its power is in its simplicity, he said. He’ll ask a few questions about a patient’s beliefs or who or what is important to them, but the best tool is silence. He asks simple questions and listens for spiritual language.

“Not everybody has the same vocabulary for describing something sacred or something meaningful beyond their human experience, and so one of the things we try to do is just learn how people speak about their emotional and spiritual life, and we ask questions about that,” Marler said. “And then we’re quiet. We wait.”

There’s a temptation to fill the silence with words, he said, but chaplains are trained to ask questions that provoke introspection and stay quiet long enough to allow the other person to reveal “what’s going on inside of them.”

Marler might ask how their spirit is doing or what is giving them hope. People in Alabama tend to be comfortable talking about their faith and their congregations, he said.

“If we allow people to feel what they’re feeling when they feel it, instead of trying to fix it — boy, a lot can get done,” he said.

It’s a strategy that could be helpful in navigating the coming months, Marler suggested. Infectious disease experts are predicting that even with vaccines becoming available, significant risk of community spread could last well into the summer. Pandemic fatigue and resistance to masks, social distancing and recommendations against social gatherings can put people at odds.

By not putting people on the spot, but rather listening to what people are afraid of or who is or isn’t loving them, as a chaplain does, Marler said, enough of a connection can be established to unify around keeping each other safe.

“I don’t know anybody that really changes their mind much when they’re shouted at, and so we’re just trying to change people’s hearts and say come on, let’s do this a little while longer. We can prevent a lot more deaths and help people to not be so sick,” he said.

Marler hopes it’s something that people can take away from this collective experience.

“Just the fact that we can remember in this pandemic that we’re called to love our neighbors as ourselves,” he said.