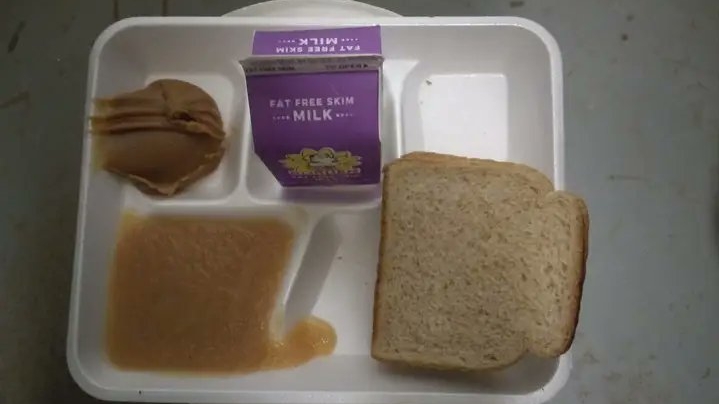 An image of food being served to incarcerated individuals during an incarcerated workers' strike in Alabama correctional facilities. Free Alabama Movement/Twitter

The situation within Staton Correctional Facility in Elmore County, a medium-security facility housing more than 1,300 incarcerated men, is becoming increasingly volatile after incarcerated workers systemwide began a general strike and protest of conditions within the Alabama correctional system, according to a source in the Staton facility.

The incarcerated men discovered on Monday that they would only be fed twice a day “until they stopped protesting,” the source said, with diabetic inmates exempted from this decision. The first meal, which was served at 4:30 a.m., consisted of one peanut butter sandwich and a small bowl of stewed prunes, with the next meal consisting of one bologna sandwich and a small bowl of canned turnip greens.

“Inmates within Staton Correctional Center are acting out, demanding their right to full meals,” the source said in a statement to APR on Monday.

Incarcerated individuals in state prisons are usually fed three meals a day, with the exception of Sunday. Two meals “which provide basic nutritional goals” are allowed based on weekend or holiday food service demands, according to Article III, section 1 of ADOC administration regulation 701.

A K9 team and internal investigations officers within the facility were allegedly seen rushing into a dorm to assist another correctional officer attempting a count within at least two dorms that “were beginning to cause problems in response to not receiving their third meal,” according to the source, with first shift officers alleging being forced to stay in the facility to assist if needed.

“This is a very volatile camp with some inmates being heard making death threats — in particular on Warden Camelia Cargle, and anyone else they feel gets in their way,” the source said in a statement sent to APR on Monday. “Warden Cargle felt the need to incite the inmates by telling them last week that she didn’t give a damn if they protested; she was going to protest too by feeding them sandwiches every day for every meal. Any time she was asked if she would give them a hot meal, she refused, stating that she wasn’t going to feed them good, so they would stay protesting.”

A spokesperson for the Alabama Department of Corrections said in a statement to APR on Monday that “all meals are happening” but that there may be delays and that “there are no riots” at the Staton facility.

On Monday, incarcerated individuals within Alabama correctional facilities began a general strike at all major correctional facilities in the state. Their demands focus primarily on legislative solutions to preexisting laws, including a repeal of the Habitual Offender Act and a reduction of the 30-year minimum for juvenile offenders down to 15 years before parole eligibility, among others.