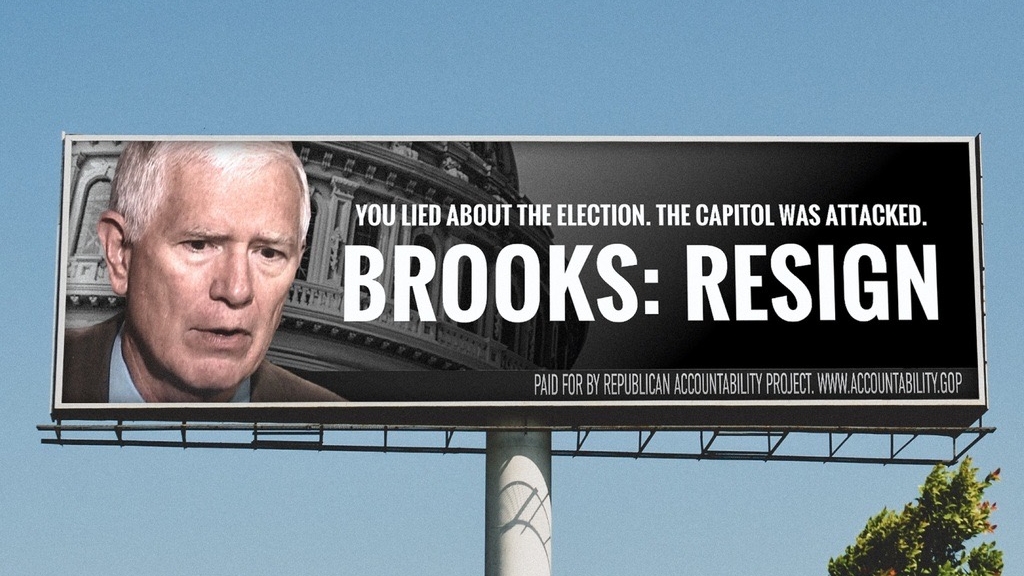 A mock-up of a billboard calling on Rep. Mo Brooks to resign. (VIA REPUBLICAN ACCOUNTABILITY PROJECT)

The Republican Accountability Project kicked off a $1 million billboard campaign across the country last week calling for prominent members of Congress to resign. They claim that Alabama Republican Congressman Mo Brooks is guilty of inciting the Jan. 6 Capitol riot.

Billboards depicting Brooks will go up in Alabama’s 5th Congressional District, urging Brooks to resign. The billboard includes Brooks’s image and the caption: “You lied about the election. The Capitol was attacked. Rep. Brooks: Resign.”

Also targeted by the RAP campaign is Sen. Ted Cruz, R-Texas. Billboards attacking Cruz will run in major markets across Texas, including Dallas-Forth Worth, Austin, Corpus Christi and San Antonio. There will be a similar billboard targeting Sen. Josh Hawley, R-Missouri, in St. Louis, Columbia and Jefferson City.

In total, there are nearly 100 live static and digital billboards running daily for the next month. The billboard campaign will be followed in the coming weeks with additional condemnations by the Republican Accountability Project of such behavior by elected leaders. There is potential to expand in other states and markets and with other members of Congress.

In addition to the billboards, RAP is going to air a new ad beginning next week that shows the direct impact of the words from these members on the crowd on Jan. 6. The ad will air statewide in Texas and Missouri and will appear on both Fox & Friends and Hannity in each member’s congressional district.

“These representatives and senators helped incite the attack on the Capitol by spreading lies about the election,” said Sarah Longwell, the executive director of the Republican Accountability Project. “They have proved that they are unfit to hold office. They should be nowhere near power.”